If there's a Heaven, Bob Thomas is playing bass there.... 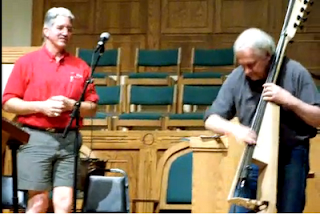 So sad to learn from Wes Chappell and Randy Marchany that Bob Thomas, the bass player for No Strings Attached (NSA) since 1984, died unexpectedly on Saturday, December 3 from  complications following a heart attack. That's a screenshot of  him on the right playing "Lady Be Good" with Randy. Wes, too, but he's off-frame. Bob took being a bassist seriously, playing not only acoustic bass, but bass clarinet, and bass saxophone, saying he had the goal of "owning a bass instrument from every instrument family."

Here's a photo of him playing that bass clarinet with NSA in 2000 taken by the late Don Shorock: 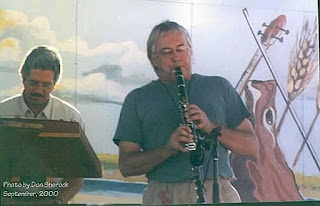 Bob was a sweet guy and a terrific musician (and showman) and his death leaves a gaping hole in our hearts and the New River Valley music community. There are many photos on this  NSA fb page.  UPDATE:  According to the December 11 Roanoke Times Bob was 66 and


The date of a planned memorial celebration will be announced at a later time. Those who wish to make a contribution in his memory could donate to the New Orleans Musician's Relief Fund, the Humane Society of Montgomery County, or the charity of your choice.


Bob was the son of the late Barkley and Margaret Ford Thomas. He graduated from Shelby (North Carolina) High School and attended the University of North Carolina-Chapel Hill.

John Jones II  posted a telling anecdote December 13 in the guestbook for Bob there.  Since I'm not sure it will remain up, I'll reprint it here:


I didn't know Bob personally, more like an aquaintance. I did borrow a contra-bass clarinet from him for a while. He had little information about me as we had never interacted but he loaned me the instrument with no questions asked and the simple request to take care of it.

The New Orleans Musicians Relief Fund, Inc. is a grass roots certified 501c(3) founded by and for displaced musicians, which is still sending grants to displaced New Orleans musicians thanks to donations from around the world.You can also donate your time, your talent and/or your gear.  One way is to help publicize the organization.  More on that at the bottom of this post.  First, back to some pictures and music by Bob.

Rusty May, who himself play bass with NSA from 1980-4, described Bob in a note to the New River Old Time listserve, as

the very talented and hardest working bassist in the New River Valley.... adept at bluegrass, bebop, old-time, swing and everything in between.

The picture is a screen shot from a video of the band playing with guests Guy George, Karen Mueller, and Butch Ross at the 2008 Winterfest in Irving, TX.

There are plenty of audio clips at No String Attached's website.  Probably the funniest Bob got was on "I'm a Hog for you, Baby."  (H/T to Jeff W. for reminding me.  Wish there were a video, or a complete version to share with you...but I'm guessing this addition photo by Shorock may be capturing one of the performances of that number: 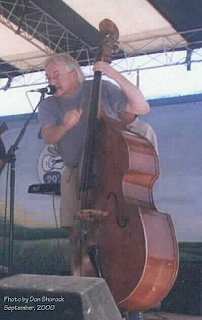 
In  addition to NSA, Bob played with a number of other groups including serving as the  upright bassists and bass saxophonist  for Front Porch Swing with Scott Perry  (r. reso-phonic guitar, ukulele & vocals), backed and Tom Ohmsen (l. on mandolin.) 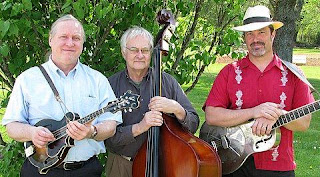 That group describes itself as a

Bob also was part of the smooth jazz group, Mood Swing, which also included  Harry Doss on guitar, Karl Sanzenbach on guitar and wind instruments and Kathy Stell on vocals. 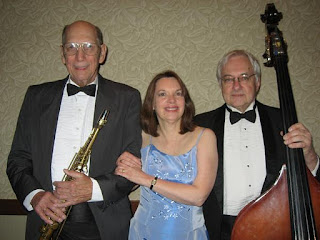 He also played in the Triple B Trio with Bill Adams and Brian Mueller. (Thanks, Rusty, for pointing that out...)


Back in 1989, he played Dixieland jazz with Doss, as well as Ed Schwartz, , John Gregg, Carter Edmondson, Bill Bondurant, Sally Walker, Norman Olmstead, and Kathy Duncan in the the Riverboat Ramblers.  I think that's the bass saxophone, right?

And his friend, Nancy Grover Mason, a bass player who lives in NC, tells me that when she was in Blacksburg (Bob taught her how to play) she was in a trio with Bob from about 1991-5 named 2 Hot Sodas:  Sandy on alto sax, Edwin Lacy on clawhammer banjo, Bob Thomas on tuba.

At the end we had a euphonium player Kevin Wilkes join us, and Bob took over either clarinet or rhythm section. He had a big "bag of tricks" he'd carry, with sticks and percussion instruments, toys, etc.

Here's a picture from the original lineup from a gig at a Blacksburg church.  (She's not sure which one, but says that it hosted folk concerts during the 90s.) 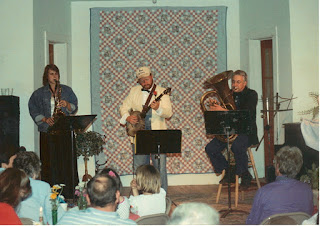 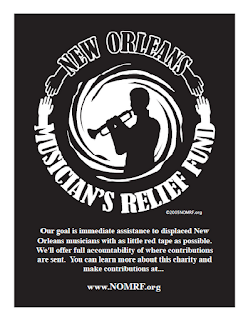 Very sad news indeed. I am very proud to have called this most kind and gentle soul a friend. A very sad day indeed. Sam Linkous

I didn't know Bob as long as many of you, but I was very glad to know him. I thought he was the ultimate team player - he was a really talented guy, but he was all about the group. He had a pretty wry wit, too. See you again one day, Bob!

Very sad. Lots of images going through my mind right now: Bob's masterful, tasteful playing, Bob's wry smile, Bob singing ("I'm a Hog for You Baby"). "Generous" is a word that comes to mind. What a loss.

He was my best friend - literally - for 20+ years. I would not be playing bass if it were not for him. But more than that, he was always there for me, through divorces and financial wreckage... he was usually the first person I'd call (after I moved to NC) when I was visiting Blacksburg, to meet for a beer and a visit at the London Underground.

I was priviledged to play with him in several bands, including the Blacksburg Community Band, and my favorite, a quirky group we called "2 Hot Sodas"... maybe the only clawhammer banjo, alto sax and tuba trio to exist.

I can't help but think I had more to learn from him, and more to give him in return for such a stalwart, steady and loving friendship as we had since 1989.

The musical community in this area has lost one of its most beloved members. Bob Thomas was a ubiquitous presence who played or had played with many of the area's most active bands, most visibly with No Strings Attached. He was a talented bassist, a synergetic bandmate and an all around good guy. He will be remembered and missed by many.