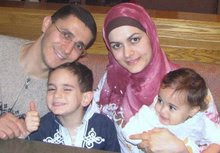 Photo of Laila El-Haddad from her blog, Raising Yousuf and Noor.

Today, as you consider the doings in Gaza, you might want to read read Gaza emigre Laila El-Haddad's "Still as death, dark is life." This poignant piece is from a longer version at The Guardian's Comment is Free (a 2008 Weblog awards finalists as announced yesterday):

My mother was in the Red Crescent Society clinic near the universities, where she works part-time as a pediatrician. Behind the clinic was one of the police centres that were levelled. She said she broke down at first, the sheer proximity of the attacks having shaken her from the inside out. After she got a hold of herself, they took to treating injured victims of the attack, before transferring them to Shifa hospital.

Now, three days later, they are trapped in their own home....

My mother comes to the phone. "Hello, hello dear," she mutters, her voice trembling. "I had to go to the bathroom. But I'm afraid to go alone. I wanted to perform wudu' before prayer but I was scared. Remember days when we would go to the bathroom together because you were too afraid to go alone?" She laughs at the thought. It seems amusing to her now, that she was scared to find her death in a place of relief; that she is now terrified of the same seemingly ridiculous scenario. It was really the fear of being alone. When you "hear" the news before it becomes news, you panic for clarity – you want someone to make sense of the situation, package it neatly into comprehensible terms and locations. Just to be sure it's not you this time.... It is Noor’s one year old birthday January 1. She will turn one. I cannot help but think- who was born in bloodied Gaza today?

Amid others' hype, posturing and pontificating, I find this effective because the author so quietly reports details of the daily life of her family and former neighbors during the current Israeli raids on Gaza and thus puts a human face on war.

If you're interested in the author, here is "Disengagement from Justice," an article she wrote for the July 28, 2005 WaPo. "A Mother Under Occupation" is an interview from the June 9, 2006 broadcast of Democracy Now. You can also watch a video Tunnel Trade that she made in collaboration with filmmaker Saeed Taji Farouky's (email) independent documentary production company Tourist with a Typewriter. She also made a film with that company on the Rafah playground, but I couldn't find a copy available online.

As my friend Betsy in KY said,

unbearably sad. I am terrified that US won't start moving towards more sane Mid East policy...I can't see any justification for the disproportionate force Israel is using!

New story recommendation of the day:

Site recommendation of the day:

The Consumerist, a soon-to-be former Gawker blog sold to The Consumer Union. Check out its guide to reading food expiration codes.

Signed up to volunteer at the Lyric for the film Sllumdog Millionaire.

Posted by Beth Wellington at 12:38 PM