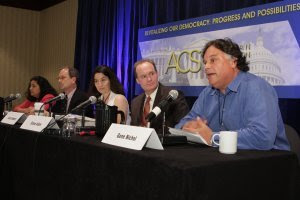 Photo of Gene Nichol (r) from a video of a panel, Rights in Conflict: Sexual Orientation, Gender Identity and Religious Liberty at the 2008 American Constitution Society for Law and Policy(ACS) National Convention.

When I found Nichol identified as a Professor of Law, University of North Carolina School of Law I decided to research when this move occurred. March 28, the Chronicle of Higher Education reported that

Mr. Nichol, 56, has accepted an offer to rejoin the law faculty at the University of North Carolina at Chapel Hill, beginning on July 1. His wife, Glenn George, a professor of law at William and Mary, will return with him....

Mr. Nichol did not respond to requests for an interview about his new position. Matt Marvin, a spokesman for the North Carolina law school, said that any controversy surrounding Mr. Nichol was irrelevant because he would be coming back to the university only as a faculty member, not as a campus leader. He added that the return of Mr. Nichol and his wife was a "coup" for the university that helped fill crucial gaps in the faculty. Mr. Nichol's specialty is constitutional law, and Ms. George's is civil procedure and labor law.

The "not a leader" quote, if accurate, seems a bit ham-handed for a university spokesman. And inaccurate, after UNC School of Law Dean Jack Boger tapped Nichol as director of the UNC Center on Poverty, Work and Opportunity

developed in 2005 to address the pressing needs of those currently living at or below the poverty level, to provide a non-partisan interdisciplinary forum to examine innovative and practical ideas to move more Americans out of poverty, to raise public awareness of issues related to work and poverty, and to train a new generation to

Nichol writes of his position:

In recent weeks, for example, we have heard much of the interests of Wall Street and Main Street. These likely represent short hands for "middle class" and, perhaps, the wealthiest among us. But even in such economically-driven conversations, we've had little discussion of the far tougher circumstances faced by the poor in this country. Almost twenty percent of American children - and numbers far higher for black, Latino and Native American kids - live in wrenching poverty. Over thirteen percent of all Americans. And in October, a study by the Organisation for Economic Co-operation and Development found that the gaps between rich and poor are growing markedly in the world's wealthiest countries - particularly the United States. We now have, it reports, the highest economic inequality of any major industrial nation. We may talk the most about equality. But our record doesn't match our rhetoric. It is not enough to simply turn our gaze away from those locked at the bottom of American life. I am confident that the Center on Poverty, Work and Opportunity will continue to make a powerful contribution to the University's efforts in outreach, teaching and research on this vital front.

BTW, others panelists at ACA were:

You can listen to the video and also peruse other sessions from this and past years' conferences at this landing page.
Posted by Beth Wellington at 5:59 PM