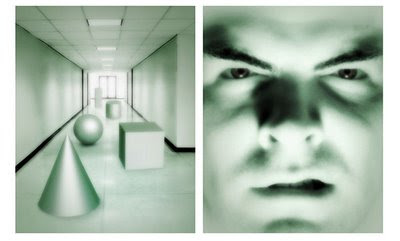 Mysterious stuff, blindsight. The (poor quality) film on Dr. Beatrice deGelder's (email) site shows a patient whose visual lobes in the brain were destroyed able to navigate an obstacle course. deGelder, head of the cognitive and affective neurosciences Laboratory at the University of Tilberg in the Netherlands, is principal author of a paper, "Intact navigation skills after bilateral loss of striate cortex" in the deceember 23 Current Biology.

The man in the new study, an African living in Switzerland at the time, suffered the two stroke in his 50s, weeks apart, and was profoundly blind by any of the usual measures. Unlike people suffering from eye injuries, or congenital blindness in which the visual system develops abnormally, his brain was otherwise healthy, as were his eyes, so he had the necessary tools to process subconscious vision. What he lacked were the circuits that cobble together a clear, conscious picture.

The research team took brain scans and magnetic resonance images to see the damage, finding no evidence of visual activity in the cortex. They also found no evidence that the patient was navigating by echolocation, the way that bats do. Both the patient, T. N., and the researcher shadowing him walked the course in silence.

The man himself was as dumbfounded as anyone that he was able to navigate the obstacle course.

Posted by Beth Wellington at 10:47 PM