Another Coal-Fired Plant for Virginia? 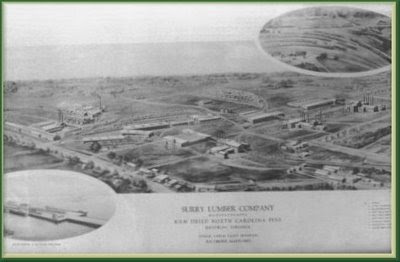 1921 poster of the Surry Lumber Company.

Dendron's been a company town before, for the Surry Lumber Company, hence its name. (Think dendrochronology). In Guide to the Buildings of Surry and the American Revolution (1976) James Kornwolf writes,

By 1906, Dendron had 1513 people, 298 dwellings, two hotels, eighteen Company stores and five churches. By 1928, Dendron's population had reached nearly 3,000 people. In addition to those establishments listed above, there was also a post office, two schools, a jail, two banks, two doctors, a skating rink, a movie theater, and a number of non-company owned businesses; such as a drug store, barber shops, garages, cleaning establishments, a pool room, a restaurant, bakery and ice cream parlor. The Surry Lumber Company shut down on October 27, 1927. Owning most of the Town, they had the legal right to destroy what they owned, and from 1928 until 1930, much of Dendron was dismantled. Left without a Company, a railroad, water system, and electricity, Dendron experienced a final nightmare in February 1931 when fire destroyed twenty-one (21) buildings on Main Street.

ODEC wants to build the plant on about 1,600 acres in the town, about 40 miles west of Norfolk in order to sell power to Virginia, Maryland and Delaware. ODEC generates and transmits wholesale electricity to almost 1.3 million people in these three states and owns 11.6 percent of Dominion Resources' North Anna nuclear power station outside of Richmond and 50 percent of Dominion Resources' Clover Power Station in Halifax County. Makes me wonder, depite the fact it was founded in 1948, what the relationship is between the co-op and the commercial company. The website says it builds and the company manages. Sounds like some kind of tax advantage to me.

Following in Dominion Resources footsteps for the Wise County plant, this one will claim to a hybrid by burning about 3% woody waste along with mostly Appalachian coal to produce 750 megawatts to 1,500 megawatts of electricity, enough to power about 400,000 homes. The Dominion plant is slated to produce 585 megawatts and cost about $1.8 billion and is being fought by the same groups in court.

ODEC announced its plans the same week that the Governor's Commission on Climate Change made final more than 100 recommendations for combat ing global warming in Virginia. Chief among them is reducing greenhouse gases -- most notably carbon dioxide -- by 80 percent by 2050. The commission chairman, L. Preston Bryant, who also is Gov. Timothy M. Kaine's secretary of natural resources, said he knew little about the ODEC plant and that its projected emissions were not part of the panel's calculations.
Noting that coal will continue to be an energy source in Virginia and the rest of the world for decades to come, Bryant said, "We very much want coal to be an increasingly smaller and cleaner part of our energy supply. "I personally look forward to hearing what advanced technologies are being proposed for this plant," he added.

ODEC's spokesman Jeb Hockman told Harper its board of directors has not yet decided yet to build the plant, which is estimated to cost $3 billion to $4 billion but could go as high as $6 billion. The utility also is interested in a site in neighboring Sussex County and will continue to consider it as a Plan B option. ODEC has not applied for permits from the State Corporation Commission or the Virginia Department of Environmental Quality, though they will submitted soon. The utility already has sat down with state environmental regulators in a "pre-application meeting" to discuss the said Bill Hayden, a DEQ spokesman.


"We're like the Saudi Arabia of coal," he said of America's reserves.
"It's reliable, consistent, still fairly inexpensive, and we think we
can handle it in an environmentally sensitive way."

If you have the time and interest, you can vote against the Surry coal plant in this newspaper poll and also register and add a comment. Right now things are not going our way

ODEC is soliciting names of folks who will come out in support of the plant on its website. It also features a toll-free hotline number

but a recording asks for a name and phone number so someone can call you back.
Posted by Beth Wellington at 5:28 PM