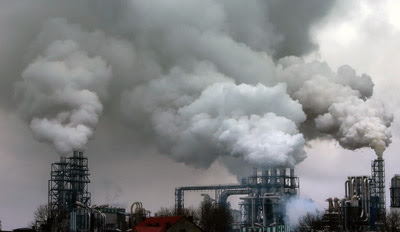 Photo from Repower America's campaign to encourage the public to comment on its CO2 rulemaking encouraging regulation.

November 28 marked the EPA's deadline for public comment on "Regulating Greenhouse Gas Emissions under the Clean Air Act" (EPA-HQ-OAR-2008-0318), notice of which was filed July 11, 2008. NRDF had a similar campaign for regulating greenhouse gasses. Meanwhile, the Citizens Against Government Waste opposed EPA making a finding. While I haven't seen notice of a final rule, we can can probably guess which side won.

First, the Bush Administration gutted MTR rules. Then today, it gave a new parting gift to coal, saying that new power plants will not be required to install technology to reduce carbon dioxide emissions. You can find this latest in "EPA's Interpretation of Regulations that Determine Pollutants Covered By Federal Prevention of Significant Deterioration (PSD) Permit Program", a memo issued December 18 by EPA Chief Stephen L. Johnson.

David A. Fahrenthold and Steven Mufson wrote about the memo in "EPA Eases Emissions Regulations for New Power Plants" which will appear in tomorrow's WaPo. (Since the internet version is available before the print version, I can tell you that the paper will bury the item on the third page of the D section.)

Johnson's memo, according to the reporters

turns on a seemingly arcane regulatory question that could govern the future of new fossil fuel-burning buildings and power plants under the Clean Air Act.

Readers here know that the Bush EPA has flat-out ignored the 2007 Supreme Court ruling that greenhouse gases such as carbon dioxide should be regulated under the Clean Air Act just like other kinds of air pollution such as soot. The current memo is the latest in a Sierra Club legal challenge to the 2007 permit for a new coal-fired power plant in Bonanza, Utah that included no requirements to control carbon dioxide emissions.

The club argued before EPA's Environmental Appeals Board that given the Supreme Court ruling, the EPA must follow its own rule which required plants to use the best available technology to control all "regulated" pollutants. November 13 the Board held that the rule was unclear.

The Board denies review of the Region’s alleged failure to consider alternatives” to the proposed facility, but remands the permit to the Region for it to reconsider whether to impose a CO2 BACT limit and to develop an adequate record for its decision....

The administrative record of the Region’s permitting decision, as defined by
40 C.F.R. section 124.18, does not support the Region’s view that it is bound
by an Agency historical interpretation of “subject to regulation” as meaning
“subject to a statutory or regulatory provision that requires actual control of
emissions of that pollutant.” The Region did not identify in its response to
comments any Agency document expressly stating that “subject to regulation
under this Act” has this meaning.

Robert Meyers, the head of the EPA office of air and radiation, said in an interview with the reporters,

That is our established interpretation....We've been applying it that way for 30 years.

Meyers said he does not know if plants are positioned to receive final approval before President-elect Barack Obama takes office on Jan. 20. Officals "close to the president-elect's team, according to the reporters,

say that the Supreme Court ruling and the EPA's power to regulate carbon dioxide can serve as powerful levers to bring corporations and other parties to a bargaining table about broad framework for controlling greenhouse gases.

That's a little vague for me. I'd much rather hear that permits will not be granted under the new administration without emission controls.
Posted by Beth Wellington at 11:00 PM