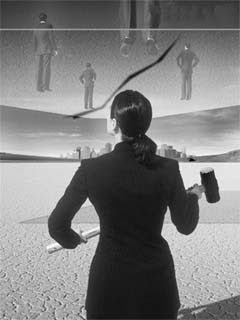 Graphic (artist not credited by source) for Vilma Patil's "Striving to Break Through the Glass Ceiling..." in the October 14, 2001 Tribune (Chandigarh, India).

In "How Star Women Build Portable Skills" in the February 2008 issue of the Harvard Business Review, Boris Groysberg (website, email) an Assistant Professor at Harvard Business School, looks back at his prior research that "star performers" fade when they move to new companies. In that research, published in the May 2004 Review, "The Risky Business of Hiring Stars" (authored with Ashish Nanda and Nitin Nohria) he found that companies are usually better off "growing stars than buying them."

Now though, he has further analyzed his data and found that the trend is more true for men than for women. That's because women were more likely to have:
But here's the weird thing. Wendy Pollack (email) at the Wall Street Journal blog, The Informed Reader, posted yesterday about the study:

The female analysts’ more successful transitions might be partly inadvertent — the women could have felt compelled to build external relationships because they had more difficulty than their male colleagues securing in-house mentors. Sexist attitudes could force them to work harder to protect their portability within the industry. And women generally look for organizations “that will welcome them as individuals,” raising the odds that they will be successful at the new firm.

I'm leaving Ms. Pollack a comment at the entry inviting her to respond:

Men, when they succeed are termed "strategic." I was struck by the fact that you refer to the success of "star" women (such as yourself, I'd add) as "partly inadvertent."

more later...I'm off to the contra dance

Posted by Beth Wellington at 3:36 PM