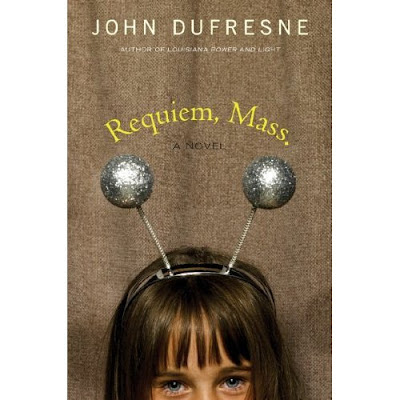 According to the blurb at Amazon, John's novel, Requiem, Mass. due out from Norton on July 18:

takes us to Requiem, Mass., heart of the Commonwealth, where Johnny's mom, Frances, is driving in the breakdown lane once again. She thinks Johnny and his little sister Audrey have been replaced by aliens; she's sure of it, and she's pretty certain that she herself is already dead, or she wouldn't need to cover the stink of her rotting flesh with Jean Naté Après Bain. Dad, truck driver and pathological liar, is down South somewhere living his secret life. And Audrey, when she's not walking her cat Deluxe in a baby stroller, spends her time locked in a closet telling herself stories. Johnny, meanwhile, is hell-bent on saving the family from itself.

For some reason Amazon says you'll like this book if you liked Ratatouille. I'll have to ask him if he knows why. Something is kerflewy with the page at Norton--when you
search on the title, the link takes you to three books on militant Islam. Evidently it has something to do with the ISBN. I've let John know by email and will post a link, once it's working properly.

As regular readers know, I'm a fan of John's. I upgraded the Wikipedia stub on him to an article in August 2005 and his books made it to my top ten list in my post "Books That Meet the Gold Standard" from December 7, 2007.

Ten days after that entry, John had to start a new blog after his site crashed. Somehow he lost the archives to his old blog which he started in 2004. When I checked the Archive.org for him, there were entries posts for him that year covering the periods:
The last crawl that captured anything was for the period July 1 - August 31, 2006. After that, the links for webcrawls bring up this message:

Not in Archive. The page you requested has not been archived. If the page is still available on the Internet, we will begin archiving it during our next crawl. Try another request or click here to search for all pages on johndufresne.com/Blog+Content.htm See the FAQs for more info and help, or contact us.

Obviously, something is wacky and a promise to crawl again is too little. too late. Similarly, with Yahoo about to bail on my blog at 360, I'm not much comforted by the Internet Archive covering me only at great intervals in 2006, with none of the links to prior entries having been recorded. Sigh. Joe Dunphy tried to download my entries to his Dad's computer, but he can't seem to email me a copy. I did discover tonight that I can backdate any entry that I transfer manually, but haven't yet figured how to get them to archive by anything other than year.

I did find a link there to a television interview I hadn't known about on cable access:

One of John's readers and now mine since April of 2007, Joe from Cheese, TX sent along a link you might enjoy, to the Salem, Virginia (since 1936) meatpacker Valleydale's archive of

TV commercials created in the late 50s featured animated pigs working or marching in a parade, playing band instruments and singing the "Hooray for Valleydale" jingle.

As I told him in my thank you note,

Valleydale's ham comes to me by way of Cheese. Now all we need is Rye. (Maybe wry will count.)

Speaking of the 50's he answered with a description of growing up on what he's called in the past the "dark side of the [Mill Mountian] star":

ya gotta remember i went to a 2 room school...
an iron stained Howdy Doody glass (water from a pump in the schoolyard) and we stayed warm
by taking turns carrying coal in to a stove in the middle of the room.
(sign of bigness was to be perceived to be big enough to carry the bucket WITH COAL.)

Posted by Beth Wellington at 5:36 PM