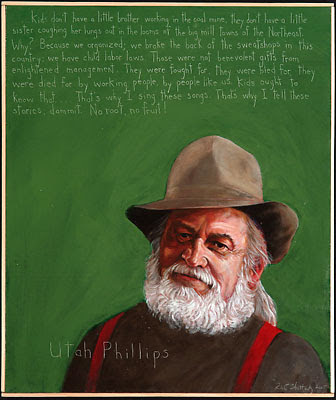 Portrait of Utah Phillips by Maine artist Rob Shetterly (email) from his portrait series Americans Who Tell the Truth. (artist's statement with links to the rest of the website.)

Kids don’t have a little brother working in the coal mine, they don’t have a little sister coughing her lungs out in the looms of the big mill towns of the Northeast. Why? Because we organized; we broke the back of the sweatshops in this country; we have child labor laws. Those were not benevolent gifts from enlightened management. They were fought for, they were bled for, they were died for by working people, by people like us. Kids ought to know that. That’s why I sing these songs. That’s why I tell these stories, dammit. No root, no fruit!
--Utah Phillips, Americans Who Tell The Truth
Here I was, about to tell you about Utah Phillips--folksinger, storyteller and supporter of working men and women. About fund raising efforts because his chronic and serious heart problems have left him unable to travel or perform. About his website adding podcast interviews. And Google AdSense ups and selects my blog as an ideal match for Rick Berman's anti-union front group, the so-called Center for Union Facts. Is Google subversively wasting Berman's money or does it lack the sense God gave a flea?

More on the former "labor management" attorney's efforts against the George Miller's (D-CA) card check legislation at the end of this post. First I want to tell that though I never crossed paths with Phillips, I've loved his songs ever since Rosalie Sorrels performed them--I can't even tell you the venue. The Jonesboro National Storytelling Festival? Maybe Merlefest?

Many of his songs are railroad-centric and my friend Ron Kaminkow, one of the founders of the New River Free Press, now a member of the Brotherhood of Locomotive Engineers and Trainmen and a steering committee member for Railroad Workers United pass on news of Phillip's plight from songwriter and New York union organizer George Mann (interview, email, website).

Local 1180 of the Communications Workers of America (NYC), and the Detroit and the Upstate New York branches of the Industrial Workers of the World (IWW), have passed a resolution honoring Phillips and attaching donations for his "retirement fund."

Bruce "Utah" Phillips is a truly unique American treasure. Not just a great folksong writer and interpreter, not just a great storyteller, Utah has preserved and presented the history of our nation's working people and union movement for audiences throughout the world. His recorded work keeps these songs and stories alive. He has spoken up against the injustices of boss-dominated capitalism and worked for peace and justice for more than 40 years.

Now Utah finds himself unable to continue performing due to severe heart problems. We wish to honor and recognize his great talent, spirit and love for the working people and the union movement of the United States. Therefore, we move to pass this resolution in gratitude for all he has done and will continue to do in his work and life. We also wish to contribute $____ to Utah Phillips in appreciation and in solidarity as he and his wife, Joanna Robinson, deal with his health and the loss of his ability to work.

Mann hopes that other unions, anti-war and labor-affiliated organizations will passing similar resolutions:

Utah has given so much of himself to the labor and peace movements. It is great news that some unions and many have chosen to give something back to him, to allow him and his wife, Joanna Robinson, to rest easy, work on his long-term health, and not have to worry about where money will come for the medicine and bills he has to pay.

Another way to help is to buy something from Utah's vast catalog of songs and stories. You can order his CDs online through cdbaby.com, but pay less and get more money to Utah if you order directly:

You can also send a donation to that address. Ron adds these recommendation on what to order:

For train and tramp stuff, “The Telling Takes Me Home” is probably best. The 4 CD set has a lot of this stuff on it as well together with stories on the background of how he came to write each song. For union and Wobbly stuff, the “We Have Fed You All For A Thousand Years” is probably the best. Please help out an old tramp and buy some of this great music. I already own a bunch of it and plan to buy a bunch more given the old guy’s plight. I hope you will too.

You can read "Interview with Utah Phillips" by Carolyn Crane in the July/August 2004 Issue of Z Magazine (Volume 17 Number 7/8).

Now back to Berman. I wrote about the card check legislation March 18, 2007 for LLRX.com:
"Labor Protections and the Role of Card-Check Agreements:

George Miller (D-CA) identified a disturbing trend July 13, 2006, in President Bush’s National Labor Relations Board [NLRB] Rolls Back Labor Protections, and introduced H.R. 800, authorizing card check-off campaigns to establish union representation unless 30% of workers wanted a NLRB-run secret ballot election. The bill, which also would increase penalties for unfair labor practices, overwhelmingly passed the House [by a vote of 241-185] on March 1, 2007, with critics claiming the status quo, in which employers can require NLRB elections, evoked the democratic tradition and protected workers.

On June 26, all the Democrats voted for cloture, along with Arlen Specter (R-PA). While enough to pass the measure, it was not sufficient to stop a threatened filibuster.

Posted by Beth Wellington at 1:20 PM