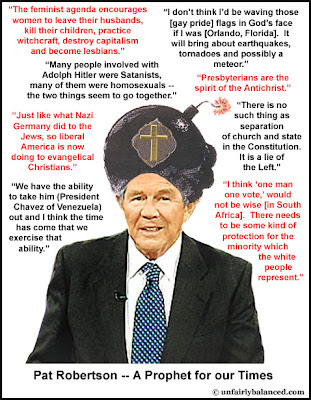 I last wrote about Pat Robertson when he suggested a hit on Hugo Chavez. (See "Pat Robertson and Venezuela" from August 25, 2005). Look at the above quotes (and these with citations from church organist and computer guru Liz Stanley (current website). Is this the guy you'd want publishing your local paper?

He'd like to, if you live in Norfolk, Virginia and the surrounding area, according to business writer Philip Waltzer's (bio, email) Virginian-Pilot story of January 11, "Pat Robertson says his attorneys are looking into bid for The Virginian-Pilot." That paper is the flagship publication of Batten-family-owned, Landmark Communications, which bought the Roanoke Times from the Fishburns in 1969. In an e-mail forwarded by his personal assistant, G.G. Conklin, Robertson wrote Waltzer,

I am considering a potential bid for the Pilot and have asked my attorneys to look into it. ...It would be particularly helpful to provide internships for Regent University journalism students.

Since Robertson started his now-international Christian Broadcasting Network in Portsmouth to serve the Norfolk-Portsmouth-Newport News market, I thought, at first, that the acquisition had something to do with the controversial FCC ruling December 18, which according to the Washington Post's Frank Ahrens,

partially lifted a 32-year-old ban that prevents a newspaper owner from also owning a radio or television station in the same city.

But Robertson sold that station in 1988.

Landmark is not saying why it may sell its original paper the Pilot. January 2, Waltzer and his editor Bill Choycke broke the story in the Pilot that the corporation is considering selling off its assets. "" is no longer available online, but you can get it via E-library. or you read stories by the same writers which were tailored for Annapolis and Roanoke papers. Charles Apple's blog features a summary of the papers coverage of its own possible fate in his blog. Apple was the graphic designer for the Pilot for four years until the paper reorganized and demoted him to graphic artist.

Still up at the Pilot's site, is Waltzer's sequel but in case it also disappears, you can find "Landmark Communications chairman says selling company was his idea" republished story at TMC.net. Here is a list of Walzer's stories on the topic, as Apple doesn't always provide the article title with his links and who knows how many more will disappear:
See also Diane Tennant's

There was a time, less than a year ago when the company was adding papers. On April 25 , 2007, the company announced that it had acquired full control of Annapolis publisher Philip Merrill's newpapers, in a swap for its interest in Merrill's Washingtonian Magazine. Landmark had having bought 49.9% of his holdings in 1975.

According to Washington Post reporter Elizabeth Williamson, 72-year-old Merrill, despondent about his health, set sail alone on his 41-foot boat, tied a mushroom anchor to his leg and shot himself in the head June 10, 2006, precipitating a 9-day search which included "half-dozen boats, helicopters and members of several law enforcement agencies."

Walzer reported his widow Eleanor Merrill's statement at the time of the swap:

Although this decision has been a difficult one for me, I am confident that Landmark will preserve the traditions that have made our newspapers such an integral part of their communities.

That was then and this is now.
Posted by Beth Wellington at 7:09 PM