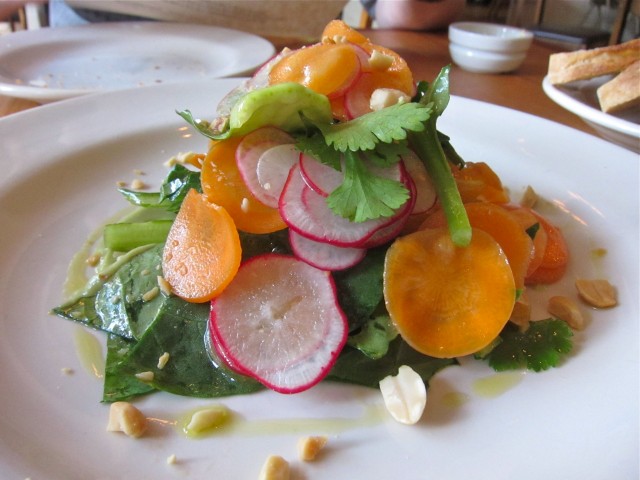 Photo from Alayna Tucker is from a salad she ate at Billy and Kristin Allin's restaurant Cakes & Ale  in Decatur, Georgia.

Tucker doesn't provide a recipe, but she lists the ingredients as tatsoi, carrot, radish, fresh cilantro and peanuts, served with a citrus avocado puree.  Since the October 6 farmshare from Glade Road Growing  is slated to  tat soi, radish and carrot (as well as include lettuce mix, bunch arugula and delicata squash) I used this photograph as inspiration for today's recipe.  Tatsoi, like its more famous cousin bok choy is an Asian green in the mustard family.

1.  Rinse and drain tatsoi, radish, carrot and cilantro.  (If the radish comes with the greens remove them and use for a savory salad green with the arugula and lettuce mix.  If you're not making this recipe today, go ahead and separate the leaves from the bulbs of the radish, as both will keep better separately.)  Thinly slice the radishes and carrots into round slices using a sharp knife or a mandoline.  Separate the tatsoi leaves.  If the tat soi leaves are large, tear into several pieces.  Pull the leaves off the stems of the cilantro.  Store any extra cilantro in a lidded glass jar inverted in the refrigerator.


2.  To make the dressing, halve, peel and de-pit one ripe avocado. Smash, peel and mince one clove of garlic. Squeeze 2 tablespoons of orange juice and 1 tablespoon of lime juice. In a blender or food processor, puree puree the avocado, garlic, orange juice, and lime juice. Season with 1/8 teaspoon red pepper flakes and a dash of sea salt and fresh ground pepper. With the machine on, gradually blend in 2 tablespoons of extra virgin olive oil or avocado oil.

3.  Dress the tatsoi and vegetables but keep separate.  Divide the tatsoi among four plates or bowls.  Arrange the radish and carrot slices on top of each serving.  Garnish with cilantro and toasted peanuts and serve immediately.   If you'd like this to be a main coarse, rather than a side, you can add cook beans or chopped cooked chicken.

While I'm at here's another recipe for the squash and radishes, a jewel-toned Moroccan stew I really like. You can use the tatsoi as a cooked green with tempeh or in a stew with tempeh or tofu and the squash, rather than sweet potatoes.  The arugula is yummy served wilted in a salad with pears and cheese or tossed with whole wheat pasta, walnuts and asiago cheese.
Posted by Beth Wellington at 2:33 PM