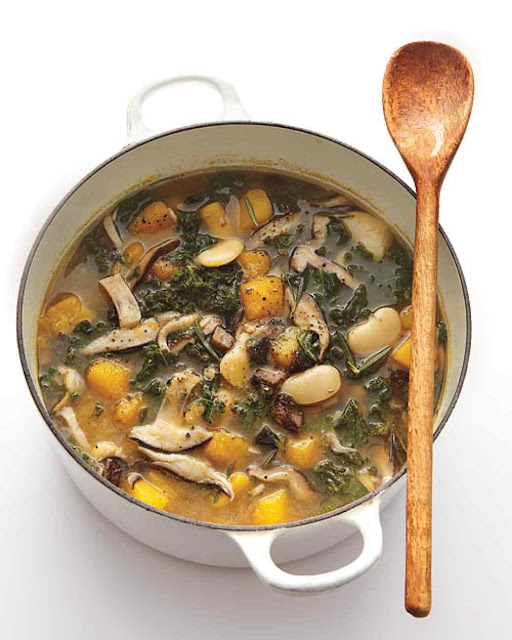 The October 13 farm share from Glade Road Growing is slated to include sweet peppers, radishes, buttercup squash, salad mix (lettuce mix plus baby kale and baby tatsoi), garlic and a. bunch of kale.  Here's a hearty stew that uses the squash, garlic and kale plus mushrooms and dried lima beans.

Or if you'd prefer, I like to combine the radishes and squash with beets to make this Moroccan stew.

1.  At least several hours before you make the soup, cover 2 cups of dried lima beans with water and bring to  to a boil in a stainless steel pot with a fitted lid and heavy bottom.  Rinse well.  Cover again with four cups of water and bring to a boil a second time.  Turn down and let simmer for 5 minutes and then turn off heat and soak for an hour or overnight.

2.  Preheat oven to 450 degrees F.  Cut a butternut squash in half and scoop out seeds.  (You can removed the pulp from them and roast, as you would pumpkin seeds.)  Place cut side down on a cookie sheet covered with parchment paper and roast until soft.  You can do the same in a countertop convection oven.

3.  While squash is roasting, drain and rinse limas and cover with 4 cups of water in a large covered soup pot.  Add 2 bay leaves  and bring back to a boil and then turn down to a simmer.

4.  Rinse and peel 1 large onion and coarsely chop.  Smash, peel and thinly slice 8 cloves of fresh garlic.  Saute onions in a heated cast iron skillet coated in extra virgin olive oil until the onions are soft and fragrant.  Add garlic and cook for another minute or so and transfer both to the soup pot.

5.  Rinse and pat dry 1 pound of mushrooms (white, crimini, and/or shitaki).  Thinly slice and saute in the same skillet, one layer at a time until golden brown and transfer to the soup pot.

7.  When squash is soft, peel skin and chop into cubes and add to the soup pot.

8.  Rinse kale.  Remove stems and reserve for other use, such as a soup stock.  Thinly slice leaves.  When beans are tender, stir in kale and cook until tender, about five minutes more.  Season with freshly ground pepper and 8 tablespoons of  miso, stirring well.  Serve warm in Serve in individual bowls.  To make this a main dish you can serve it over cooked grain such as barley or over cooked whole wheat, buckwheat or corn pasta.
Posted by Beth Wellington at 3:17 PM