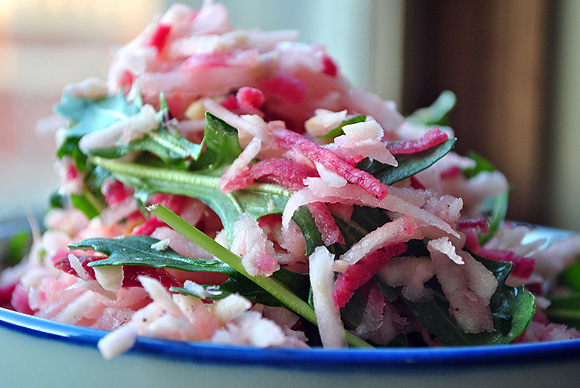 This photo accompanied a  Sanura Weathers recipe in Frugavore. Check out her blog, My Life Runs on Food (at the link for her name) for more of her creations. Weathers used kohlrabi and a balsamic vinaigrette, but I adopted the recipe for a more Asian flavor, using the October 7 farm share from Glade Road Growing, which is slated to include: tat soi, bok choy, a watermelon roasting radish, cilantro, red onion, salad turnips, and arugula.

Weathers and I both like to combine something sweet such as pears with  the sharp taste of greens like arugula (last year's recipe) and brassica root crops such as turnips and radishes.  If you find the turnips and radishes too sharp for your taste when raw, you can make them milder by lightly sauteing with the onion and letting them cool before adding to the dressing.

1.  Wash tatsoi, bok choy, arugula, and cilantro and dry using a salad spinner or by setting in a colander lined with a clean kitchen towel.   Remove the cilantro from its stems and reserve stems for another use, such as a vegetable broth or pesto.  If arugula is mature, wilt in a lightly oiled skillet and set aside to cool.

2.  Smash, peel and mince a couple of cloves of garlic.  Peel and finely mince fresh ginger root to make 1/2 TB.  Combine in a covered jar with the juice of one lime, 2 TB of extra virgin olive oil, 1 TB of miso,  a dash of freshly ground black pepper, a small pinch of crushed red pepper

3.  Separate turnips from greens, reserve greens for another use. Trim root end.  Peel red onion and discard peel or save for making a vegetable broth. Cut in half and reserve one half for another use.  Trim ends from watermelon radish and peel. (If the greens are included separate and reserve as you did for the turnips.) Peel one under ripe bosc pear, trim ends, cut vertically in half and use spoon or melon baller to remove tough center and seeds.  Using a box grater, coarsely grate the turnips, onion, radish and pear into a large bowl.

4.  Lightly toss the grated salad and dressing. Let marinate for at least an hour at room temperature.
Toss again before serving.

5.  Prepare a bed of shredded tatsoi and/or bok choy either on a large platter or in individual bowls.  Top with grated salad and garnish with arugula and cilantro.  If you like, you can also top with  crumbled goat, feta or blue cheese and nuts such as walnuts, pecans or almonds.

Tatsoi is one of my favorite greens. You can use just the bok choy for this salad and save the tatsoi to make my tempeh recipe from last year.  The tatsoi would also be nice in a salad with clementines, bell pepper, red onion and almonds in a dijon vinaigrette, similar to the one shown in this photo from Shabnam Arora Afsah's Flavor n' Spice blog post: 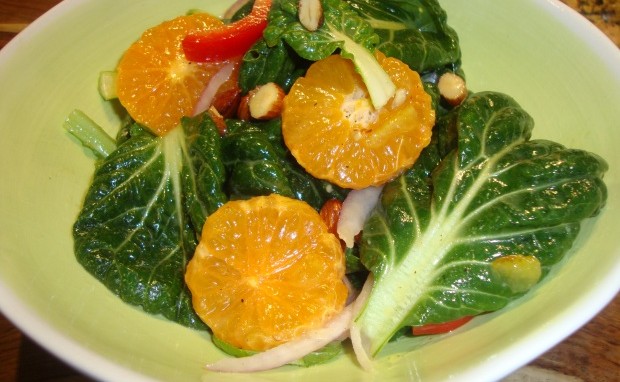 Or, Martha Stewart has a nice recipe for poached sweet potatoes and tofu with tatsoi  photographed by one of my favorites, Romulo Yanes. 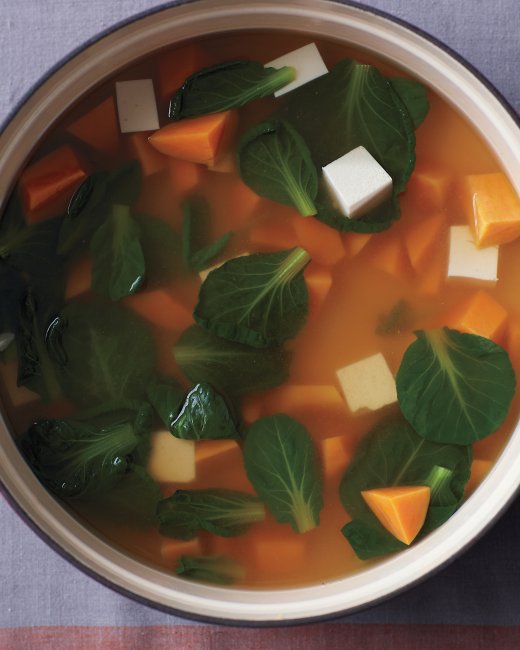 Posted by Beth Wellington at 10:45 PM