Of Hatfields, McCoys and the (Cancelled) 2013 West Virginia Book Festival

Although I LOVED Costner in Bull Durham, Altina Waller convinced me that the series he starred in  might raise my hackles with its over-simplistic depiction of Appalachia.

Waller's  the author of Feud: Hatfields, McCoys, and Social Change in Appalachia, 1860-1900 (University of North Carolina Press, 1988, 313 pp.) and she wrote an article critiquing the series for  the Lexington (KY) Herald-Leader: "Hatfield-McCoy: Economic motives fueled feud that tarred region's image."

I learned about the Richmond-based author (website contact form, twitter, fb) when I read the Festival's (twitter)  announcement  on  that  Little Brown published King's  The Feud: The Hatfields and McCoys, The True Story  May 14, 2013. His book includes quotes from contemporary newspaper accounts. King also appeared in an accompanying documentary on the History Channel(IMDB listing), which was also narrated by Costner and produced, not in Romania as was the series, but in WV and KY.

The Festival is where, in 2010,  I got to have a reunion with Irene McKinney, the late poet laureate of West Virginia, after we first met at the West Virginia Writers Mountaintop Removal Tour in 2006.  The Festival is so popular that last year, the vendor spaces had sold out by May.

I thought Dean King must be coming to the Festival in October and that I'd like to hear him speak. It turns out, though, he will be speaking at the Elk Valley Branch library June 3 at 6:30.  It's hard to justify a trip that's longer than the King's lecture.  And then there are the tolls.  I probably won't be driving up to Elk Valley unless I can combine King's talk with other events.

The Board of the Kanawha County Public Library voted March 11, 2013 to cancel the shebang in hopes of saving about $100,000--$90,000 for the annual budget plus labor from paid employees. That's because the county library lost 40% of its funding when the WV Supreme Court ruled  in February in favor of the School Board that it should not be required to support the library:  the special act  of 1957 which required nine of the state's 55 counties to set aside money for their libraries was unfair. Mackenzie Mays (email, twitter, fb), the education writer for the Charleston Gazette has a good explanation here.  Shay Maunz (email, twitter, fb), who has the same position at the Charleston Daily Mail does a good job of explaining the library board's actions here. While those minutes are no longer available online, I was able to retrieve the follow-up discussion of April 8, 2013.

While the West Virginia Humanities Council is a charter sponsor of West Virginia festival, along with the Charleston newspapers and others, staffing and operational support comes primarily from Kanawha County Public Library.  Pam May,  Marketing Supervisor for the library (email, twitter) has chaired the festival since 1997.

Why I was hoping to hear Dean King there

I'd like to compare King's take on the feud and the series with that of  Waller. Here's what she wrote in her Herald-Leader piece:

What happened was that politicians and businessmen in Kentucky learned that the Tug Valley, up until then considered the backwater of the state, contained valuable resources...Perry Cline [who had lost land to the Hatfields and demanded revenge]...was able to convince the governor that the barbaric Hatfields stood in the way of economic development.

Only this potential economic bonanza can explain why the governor would respond to Perry Cline's rants against the Hatfields and his demands for revenge.

[Cline]...brought about the worst violence along with national notoriety. Eight of the desperate Hatfields attacked the McCoy cabin, killing two children. Both governors authorized posses to do battle on the border and bounty hunters appeared in great numbers.

Most of the initial newspaper reports came from Cline, who was able to portray the Hatfields as the uncivilized barbarians. Yet, in the end, all mountaineers came to be tarred with that brush. The civilized capitalists who built railroads and coal mines were delighted to portray all mountaineers as ignorant, immoral and violent, arguing that economic development — railroads and coal mines — would bring civilization to the region.

What it did bring was more violence and more poverty.

Thus, the context that most helps to explain the feud is not the old rivalries of the Civil War but the agricultural crisis and rapid economic exploitation of the region occurring at exactly the same time as the events of the feud. That coincidence of timing alone suggests we take seriously the relationship between them.

You'd think the Charleston business and civic community would love the festival.  It seems it could help its state shine. It sure seems that's the case this requiem (illustration at the end of my post) which Gazette City Editor Greg Moore (email, twitter) wrote a for the festival March 13.


I can’t tell you how many people I talked to at the Book Festival over the past few years, or interacted with on Twitter, who were genuinely surprised to find an event like the Book Festival in Charleston, or in West Virginia.

Contrast this with Virginia Festival of the Book

Sure, Virginia Festival of the Book, (dates for 2014 are March 19-23) has the resources of  the Virginia Commission for the Humanities behind it.


Business officials say the book festival is a black-ink event, bringing money into the local economy through meals and hotel stays. The festival's importance, however, is less in its financial boon and more in its image boost.


The ability to identify yourself as a literary community has a positive impact in a variety of ways....You have people who come to town, attend literary events and return to their home communities telling their friends about what a great place this is. That word-of-mouth pays off in tourism and other ways....The book festival is a great way for Charlottesville to shine....It's good advertising for the community. There's nothing bad about good press.

And yet, the state continues to be known more for the Hatfield and McCoy feuds and  mountaintop removal coal mining.

The WV Division of Tourism touts the economic value of  travelers to the state.  Can it help the library reinstate the Festival? 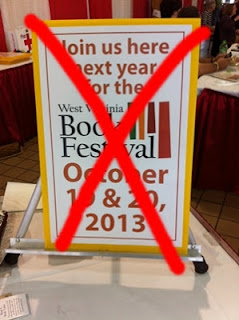 Posted by Beth Wellington at 6:24 AM