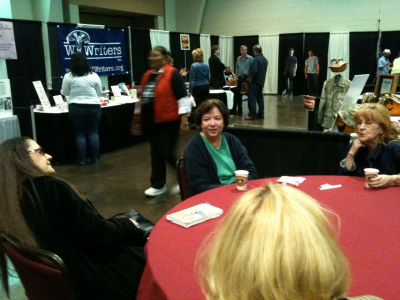 
This will be brief and I'll write more later.  I just wanted to let folks who loved Irene know, if they hadn't heard the sad news. The Poetry Foundation, publisher of Poetry magazine hasn't even posted the news yet at her bio, as I write this. The service is 11 a.m. Wednesday at Talbott Funeral Home in Belington,, WV (Barbour County), where Irene was born and grew up on her family's farm. That's about 2 1/2 hours from Charleston, 4 hours from here.


She is a great loss to the state of West Virginia...She made West Virginia real, sensory and important in all its timeless variety, the land, farms, the people and animals, the rituals. She knew the meaning of home place.


I last saw Irene McKinney that Sunday in October 2010. Before her reading, she sat next to me on one of the benches in the cavernous Charleston Civic Center, talking about how excited she was to start a new low residency MFA Creative Writing Program at West Virginia Wesleyan and asked if I had any suggestions for faculty. I told her about Katie Fallon, whom I knew from her time at Virginia Tech. Irene's announcement followed the first week in November.

The program offers interested writers the opportunity to explore the connection between place and identity, focusing on their home area, one of the field study destinations, such as Ireland, or the Appalachian region itself. The program will officially launch in July, 2011 with a three-day literary festival, and the deadline for applications is March 1, 2011.


Irene was so approachable, so enthusiastic, treating folks as her equal. Outspoken and ironic, she often repeated the words which can be found penned in the introduction to the 2003 anthology "Listen Here: Women Writing in Appalachia."

I'm a hillbilly, a woman, and a poet, and I understood early on that nobody was going to listen to anything I had to say anyway, so I might as well just say what I want to.


I had only met Irene once before, when I got to participate with her and Denise Giardiana as part of Ohio Valley Environmental Coalition's West Virginia Writers MTR project. I already knew Denise from Hindman and Jeff Mann from VirginiaTech, as well as Chris Green and Edwina Pendarvis, who had edited an anthology that included one of my poems, as will as Diane Gillam Fisher, whom I had just met that March at the Appalachian Studies Association conference. The project was where I met Katie, Bob Henry Baber and Rob Merritt.