Judy Bonds: "Fight harder and finish them off." 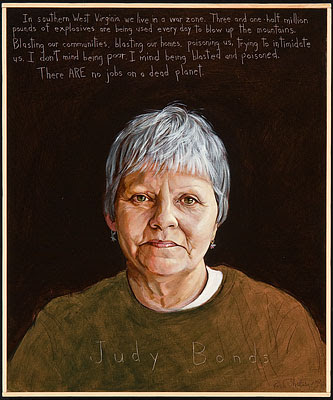 Portrait of Judy Bonds by Robert Shetterly for his project, Americans Who Tell the Truth, used by permission of the artist. (UPDATE 7/29: Ordering info--more details see the bottom of this entry.)

Vernon Haltom, Judy Bond's co-director of Coal River Mountain Watch, just sent me the bad news that Judy has found out that she is battling stage three cancer. Vernon writes that "She said that some people have asked her before, "What do you want us to do if anything ever happens to you?" Her answer is "Fight harder." She repeated that today, to fight harder. " Her words:

We've got them on the ropes and smell blood. Don't let up, fight harder and finish them off.

I'm sharing this by permission. When I asked to what extent I should share the news, Vernon answer, "I asked how much of that she wanted me to let folks know, and she said there's no point in keeping it from people."

Treatment will take at least 3 months, and she doesn't expect to be back at work for several months. Judy had been sick for several weeks when her doctor sent her to the hospital in Charleston, after antibiotics didn't work on what had been diagnosed as pneumonia. Vernon wrote,

Judy has always been a fighter, never giving up. This is her big fight now; the only one she's able to do right now. ...Please, keep her in your prayers.

Judy won the prestigious Goldman Prize in 2003, for her work in fighting mountaintop removal. I also love the quotation on the page I've linked to.

The right to mine coal here ends where it endangers our health and safety. You may have your job tomorrow, but what do you tell your kids? That you wasted the future of these mountains?

I'm putting this on a separate page, so as not to mix my discussion of how to crowd-source my journalism with news of Judy. But if you're interested, see my July 29 update: "Why I decided to try and fund this blog." (And, I might mention, if the experiment goes well, to also provide a way for me to fund support for activism in the coal fields and others' media coverage thereof. Too bad I didn't have the idea before I launched this page--for a while it was getting over 300 out of the last 500 hits, according to statcounter. If this works, I might also pitch in for something other than a free account and have better data.
Posted by Beth Wellington at 3:01 PM

Beth, Vernon, All,
I am so very sorry to learn this about my dear friend Judy. She is my hero. I'll be keeping Judy in my thoughts and prayers, and will pray for a complete recovery for her. She's gotta fight this fight as hard as she's MTR, and I believe she'll beat both !
much love to Judy, and to all of you -
Joy
Joy Towles Ezell
Perry, FL