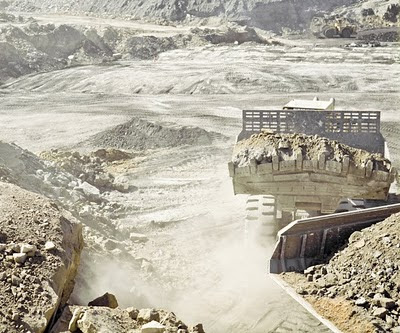 Photo of a mountaintop removal site by Daniel Shea of Chicago, who is now working on a series of photographs of coal plants, entitled Plume. (I'll be writing about his print sale to fund that project in my next post.)


*
In reading Alessandra Stanley's July 12 column, "Mr. Secretary, This Is Your Life (in Plenty of Detail) I thought of the PBS handling of the film Coal Country v.s. that of the tribute to George Schultz. At the time that PBS pulled the plug on airing Coal Country, citing its Sierra Club funding, I wondered whether Board member Sharon Rockefeller (wife of the big coal lovin' WV Senator) had played any role.

I had seen the film at its West Virginia premiere and found it to be pretty even-handed, using a much more sympathetic representative of the coal industry than, say, Black Diamonds. This is not to criticize Catherine Pancake or her film. I am just saying that Coal Country, by Mari-Lynn Evans and Phylis Geller, looked to me to be ready for prime-time PBS, more akin to Ken Burns, than say its more controversial programming, such as POV.

Funding for the George Shultz tribute

Now, according to Stanley, PBS is airing a three-hour George Shultz tribute, whose sponsors include

Mr. Shultz’s Nixon-era colleague, Peter G. Peterson, who is married to Joan Ganz Cooney, the founder of Children’s Television Workshop. The Stephen Bechtel Fund gave money, so did Charles Schwab, founder of the Charles Schwab Corporation, where Mr. Shultz also served as a board member. So did many prominent foundations and individuals, including Senator Dianne Feinstein, a Democrat from California.

But John Wilson, the chief programming executive told Stanley that money had nothing to do with airing the program.

We evaluate programs on their merits ...PBS has a vivid track record of covering this administration’s key players. It goes without saying this is not our first look at the Reagan White House and not the last.

I guess just not so vivid a track record of covering mountaintop removal.

The directors of Coal Country react

The filmmakers of Coal Country have said,

It is important for us to state that THE APPALACHIANS airing on PBS (and one of their largest pledge films) was also funded in part by the Sierra Club. Now we learn that PBS has accepted a 3 hour film on George Shultz, funded in its entirety by his supporters.

PBS's decision regarding these two films surely appears to be a conflict of interest In looking at the site for Free to Choose Media, founded by Bob Chitester and producer of the Schultz film, it hardly seems to be involved in non-partisan projects.

Free to Choose Media: can anyone say "climate change denial?

Take a look, for instance, at what's next up for the company, What a Wonderful World. The site says it features

Johan Norberg, a noted Swedish Author and Scholar, will attack the pervasive and negative myths about Capitalism, Free Trade and Globalization with an insightful, engaging and often times humorous look at the world around us as it really is.

Then there's a finished project, Unstoppable Solar Cycles: The Real Story of Greenland, which

sets aside doomsday alarmism and political axe-grinding to look at the science behind the history of climate change on earth.

Supposedly, this is authoritative since

Dr. Willie Soon of the Harvard-Smithsonian Center for Astrophysics and Dr. David Legates of the University of Delaware provide an easy-to-follow review of current climate science, which suggests that the sun's irregular patterns and other natural forces are the major sources of climate change.

Of course, climate skeptic Soon was Scientific Advisor to Greening Earth Society between Dec 1998 and September 2001 and had ties to the American Petroleum Institute, according to Sourcewatch. Legates, according to the same source is a frequent

contributor to publications released by the National Center for Policy Analysis, a conservative think-tank that strongly opposes climate change regulation.

In 1980, at least according to his website, Chitester produced a series with Milton Friedman. (I can't find it on the PBS site, nor does IMDB list who aired it.)

Take a look at the PBS standards

Here are the network's standards on editorial integrity

Greg Mitchell (email), formerly of Editor and Publisher, wrote this for his blog The Nation. But despite an action alert by Peter Hart at Fairness and Accuracy in Reporting, PBS Ombudsman Michael Getler (email, phone: 703- 739-5290) has yet to respond on his blog--the last entry was July 9. I hope that he'll write about PBS's decision-making regarding these two films, given his role in upholding the station's integrity.

UPDATE (not part of my drafted op-ed):

In getting ready to write PBS, I also located some articles for further reading:

On July 14, I emailed Getler, copying the No New Coal Plants, Friends of Mountains, Appalachian Studies, Concerned Citizens of Giles County, Surry Justice and Mountain Justice Organizers lists, as well as the three writers above and Mari-lynn Evans:

I hope your station will revisit the original decision to not show Coal Country. By copy of this, I'm letting friends on several email lists know about this, thinking that they may find the topic of interest and want to contact you.

As does Joe Strupp at Media Matters:

And Peter Hart at FAIR

On July 16, I copied just the three writers and Mari-Lyn, plus I wrote the NYT's author at the contact form at the paper.

BTW, I notice that you have a blog and the last entry was July 9. I hope that you'll write about your decision-making regarding these two films, given your role in upholding the station's integrity, especially in light of the standards on editorial integrity:

These standards are especially interesting, given that you gave the filmmaker an extra hour, according to the New York Times.

Also, you might be interested to know that this is a quite a topic of interest. My blog post has had more hits than anything in a long while.

Posted by Beth Wellington at 11:50 AM

I called Mr. Getler at PBS yesterday on 7-15 and he said he didn't know anything about it, but will call me back to let me know if they are going to air Coal Country. I didn't get into the George Shultz tribute with him, yet. One thing at a time. I posted this on FB. I hope people notice.

He still hasn't called back.

Thanks, Pat! Keep us posted. At least he answers his phone, lol. I haven't heard back re email yet.