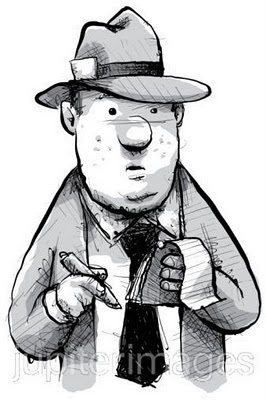 Dylan Lovan is an AP journalist who uses the above stock illustration from jupiter images on twitter. He recently got lots of coverage for reporting on the strip miner's revenge on Ashley Judd for speaking out about mountaintop removal, reporting which has, in turn, been getting criticism on various list serves (and I'm sure support on others.)

I'm glad that the later version of your story included quotes from Ms. Judd.

What disappoints me is that you went to press before getting her side of this--could you not wait for her reply? And if not, could you have at least interviewed others who oppose mountaintop removal and written a better lede?

Appalachian anger at Ashley Judd's outspoken criticism of mountaintop removal coal mining has led to a backlash using a topless photo of the actress.

This was not "Appalachian anger," although the story circulated by the likes of HollywoodNews.com, repeated a narrative of the do-gooder-outsider Judd versus "the locals."

Many whose roots in our region go back generations adamantly oppose mountaintop removal. And Judd was more than just KY-raised "outsider:" I've read that her mom was a KY native who returned home after a divorce from Ashley's dad. If the adage about outsiders, "if a cat had kittens in the woodbox, it wouldn't make them logs" is true, how about the converse?

Nor was Judd's appearance at the National Press Club the first time she's spoken out about mtr. Besides, as others have pointed out, the sexist sign is a sensational non-sequitur. Judd's top is hers to remove and she can put it back on. The mountains (and those who love them in their pre-mtr shape) don't have that option: those who engage in mountaintop removal are poisoning water and laying waste to our landscape and our communities.

I'd urge you to use your journalistic skills to research who funded the sign, so that s/he can not gloat anonymously.

BTW, Lovan has been with the wire service since 2000 and his bio says that he's

The Kentucky AP publishes Mr. Lovan's email address and I tried to write him via twitter, facebook and email before posting my take on his coverage, so as to get his response. Unfortunately, the server returned an error message:

I wrote an AP colleague of his to found out about the bounce, who can't explain it.

Since I haven't heard back and the library is closing and tomorrow I'll be in Beckley, I'm posting this without his response. Which is ironic, given the content, but I don't have anywhere near the AP's circulation, so if I do hear back, the correction will be included before many read this.
Posted by Beth Wellington at 2:54 PM