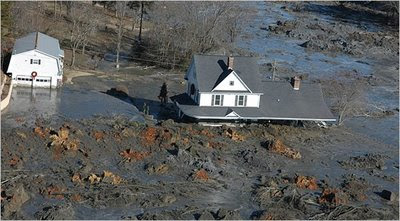 This photograph by J. Miles Carey of the Knoxville News Sentinel accompanied a NYT story by Shaila Dewan, "Coal Ash Spill Revives Issue of Its Hazards." In the wake of the spill, which I wrote about December 25, 2008, the EPA promised to look at regulating coal ash as a hazadous waste.

Now we get news of that EPA will labor under skewed cost benefit calcs imposed by the Office of Management and Budget. The question remains whether public opinion can force the OMB to back off or whether industy pressure will prevail.

Here's what Dawn Reeves says in "EPA Cuts Coal Ash Rule's Benefits To Measure Industry 'Liability Fears'"in the the June 4 edition of Inside EPA (hat tip to Lisa Evans at Earthjustice for the heads up--a sub goes for $320 a year.)

At the insistence of the White House Office of Management & Budget (OMB),
EPA was forced to slash by more than $300 billion its lower-end estimates of
the regulatory benefits from its recent proposal to regulate coal ash as a
hazardous waste due to industry's "fear of liability," the first time the
agency has quantified such fears in a cost-benefit assessment, sources say.

The diminished benefits estimate may make it more difficult for EPA to
justify strict regulation of coal combustion residues (CCRs) as agency
regulations are generally required to demonstrate greater benefits than
costs, unless barred from doing so by Congress.

due to fear of liability and stigma, resulting in more waste being shipped to a hazardous landfill -- ...[and thus change] the low-end range from a positive $87 billion to a negative $230 billion.

As a result the EPA "fixed" a table in the May 4 draft rule's preamble., but also noted that that the "correct" range was

identified elsewhere in the original proposal's release and states that its inclusion was "at the urging of OMB as a condition to conclude review" -- an explicit reference that EPA was forced to change its initial calculations that the rule would have no negative impact on beneficial reuse after OMB held up the normal 90-day pre-publication review for six months.

Reeves interviewed a former senior OMB official, who said it

"seems like a typical EPA and OMB dispute-resolution mechanism" with the only "unusual feature" the "transparency about the OMB condition." The source adds that normally EPA will adopt OMB's position "because the executive branch, representing the president, can have only one official position for purposes of judicial and congressional review." However, there is a process for agencies to seek to overturn OMB's position, known as a "presidential reversal," but EPA did not appear to seek such an option in this case.

"By the time this final rule is issued, my prediction is that OMB and EPA will have resolved their differences and there will be only one official view reported for purposes of judicial review. This is required by the unitary concept of the executive branch. The president's view prevails," the source says. And because Obama is unlikely to become personally involved in the issue, the source predicts "a persistent OMB is likely to prevail, though the public comment process could persuade EPA and/or OMB to modify their positions."


The change could mark the first time EPA or other agencies have been required to quantify the "fear of liability," sources following the issue say.

She writes that one of sources, an environmentalist, warns that


"It makes the ranges look so crazy, no one would want to take a chance," and that could result in forcing EPA to "go with the more rational proposal."

"about as reliable as melted Jello" because the low end assumes that most coal-fired power plant managers would pay high disposal costs to send the waste to a subtitle C landfill, rather than sell it to be mixed with cement, because the operators will be "so terrified of liability down the line."

The source argues that fear of liability should not be included because, as the EPA notes through out its proposal, tightening of waste rules has always increased recyling.

Another environmentalist told Reeves that that EPA's regulatory text shows

"that the stigma fear has never panned out in the past" and that EPA should require industry opponents to prove their point rather than be forced to quantify it. "The idea that no one is ever going to recycle coal ash for the next 50 years is so beyond the realm of possibility it's laughable," the source says.


"not realistic," and notes the agency "was forced to go back and recalculate the real impact on the reuse industry." The source adds it is unclear whether the costs could be as high as negative $230 billion but notes that some impacts are "real."

Posted by Beth Wellington at 6:09 PM