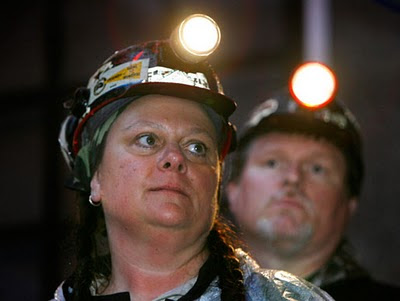 EmmaKate Martin and Benjamin Bryant, two Climate Ground Zero activists languish in the Boone County jail on $100,000 bail each for a protest blocking the driveway yesterday at Massey's regional headquarters, union members. CGZ is asking that folks call Magistrate Snodgrass in Boone County at 304-369-7360 to demand that the bails be reduced to a reasonable amounts on the grounds that the 8th Amendment to the U.S. Constitution states that

Excessive bail shall not be required, nor excessive fines imposed, nor cruel and unusual punishments inflicted.

Meanwhile activists converged on the Jefferson Hotel in Richmond, Virginia this morning, site of Massey Energy's annual meeting, after a candlelight vigil in front of Massey Energy headquarters, also in Richmond, for the 52 coal miners killed in Massey Energy accidents in the last 10 years--29 in the Montcoal, WV explosion April 5, 2010.

The demand: safe and humane working conditions for miners and criminal accountability for CEO Don Blankenship. While the stockholders didn't exact punishment on Blankenship and the Board, Kris Maher and Joann S. Lublin in "Three Massey Directors Eke Out Reelection" in the 5/18/10 WSJ reported,

Three Massey Energy Co. directors won reelection at the company's annual shareholder meeting, after they had been under fire from public pension funds and other investors who alleged that Massey's safety performance contributed to the April explosion at the company's W.Va. mine where 29 workers were killed. But union group CtW Investment Group said that the three directors won reelection by narrow margins, casting "a cloud" over the board going forward. CtW is an arm of labor federation Change to Win. The federation represents unions with six million members whose pension funds own less than 1% of Massey shares. Michael Garland, a representative of CtW, cited preliminary results from a proxy voting agent and said Massey President Baxter Philips won reelection with 49.6% of votes withheld by shareholders, while outside directors Dan Moore and Richard Gabrys won reelection with 49.8% and 48.5% of votes withheld, respectively.

Massey is polluting the land and water with toxins in addition to stripping the land with its much-contested practice of mountaintop removal coal mining. Massey, in all areas of its 'business,' has no concern for the people and land of Appalachia ....Blankenship's hazardous views and actions surrounding safety in his mines have contributed to the death of the miners in the Upper Big Branch Disaster, as well as past mining disasters. Blankenship is running a criminal enterprise and must be held accountable for negligence.

The United Mineworkers of America members and family held signs such as, "Don Belongs in Jail" and cheered every time a passing vehicle honked its horn in support or the union SUV towing a trailer with the sign, "Massey Corporate Responsibility: 52 Dead in 10 Years" circled around the block.

Inside the hotel, Rising Tide had unfurled a 10 x 10 banner from the mezzanine above the ballroom where the stockholders were converging for their annual meeting: “Massey – Stop Putting Profits Over People!” They read on open letter, similar to the one tendered at Massey's regional headquarters in Boone County, WV. Kate Finnegan of New York and Oscar Ramiriz were arrested as a result. By contrast with the treatment of protesters in WV, the two were able to call from jail to say that they expected to be released later this afternoon on their own reconnaissance and charged with a misdemeanor trespass charge.
Posted by Beth Wellington at 5:00 PM