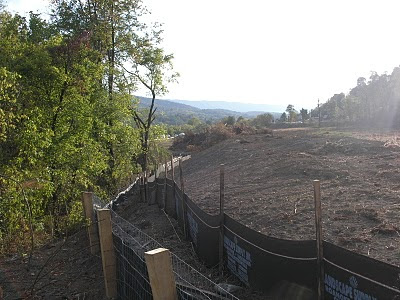 Because of Virginia's beneficial use clause for coal combustion waste, we've got a toxic coal ash dump in the flood plain of the New River without so much as a public hearing. Lead, arsenic, mercury and other metals which threaten human health can leach from coal ash when it is exposed to moisture.

The National Committee for the New River (NCNR) in West Jefferson, NC is working with Giles Countians to against the dump. NCNR started out in 1974 to organize against construction of APCO pumped storage dams on the New River and stopped them through a sucessful national campaign to get a portion of the New River designated as a National Wild and Scenic River in 1976. The group has worked since then to protect the New.

Many of you have been following the fly ash travesty in Giles County, Virginia. With this Action Alert, we are asking you today to take action on behalf of the New River!

For 2.5 years NCNR has been working with the Concerned Citizens of Giles County (CCGC) who have been working tirelessly trying to figure out how a 7.5 acre 250,000 cubic yard Coal Combustion Waste dumpsite could be placed in the flood plain of the New River.

Through dogged research, and numerous FOIAs (Freedom of Information Act), much of the “process” has now been uncovered. On April 3rd 2006, before any information about the project was public knowledge, an AEP representative requested assurances from Giles County, via an email, that their project (to dump fly ash in an unlined pit on the banks of the New River) would be allowed to move forward if the property was acquired.

Additionally, we suspect that different information was subsequently provided on the state and federal permit applications -- these agencies did not have the complete picture when approving permits.

The lack of information effectively eliminated public participation in the approval process. Citizens should have the right to comment when a dumpsite containing toxic heavy metals is placed in their community!

How can you help? We're asking you to request Congressman Rick Boucher (the dump is in his Congressional District) to continue to seek the answers to these questions. He sought a congressional FOIA in the fall of 2009, but we still have not received answers to our questions. We're appealing to VA DCR, FEMA, and EPA regarding these issues but without these answers our case is incomplete.

George has been up to visit Giles

Santucci has met with the Concerned Citizens and even offered to buy the land on the New River for $100,000 to prevent leasing to AEP fly for a flyash dump by Howard Spencer and his so-called Partnership for Excellence. The partnership describes its project like this:

The Giles Cumberland Park Project is a land improvement project which will create a 7-acre commercial building site along Rt. 460 in Narrows, Va. The development site will be created above the flood plain, using a combination of compacted recycled coal ash and soil.

The property was purchased by the Giles Partnership for Excellence, a non-profit economic development organization, for $100,000 in 2006. The land value when developed and brought to grade with Rt. 460 is expected to appreciate substantially. When sold, net proceeds from the land development will be rolled back into the community, through the schools, and/or other applications to help create much needed jobs.

George tells me Howard Spencer, who also sits on the Giles County Board of Supervisors, turned down the offer, saying too much had been invested. As George says,

At the end of this entry you'll find a sample letter to Boucher George prepared. You can send yours by email via Boucher's website if you live in the 9th district. Or sent to or by regular mail, if not. Or you can call one of the offices. Be sure to you’re your name and supply contact information for a response when you take call or send a letter.

It is critical for the people of Giles County, and everyone who values the New River, to receive answers to our questions regarding the fly ash dump on the river in Giles County. We know that you are aware of the project and have sought answers via a congressional FOIA, but to date we have no answers to our concerns about the public comment and permitting processes of this project. As a (tax payer/Giles or VA Citizen/lover of the New River), I request that you find out this information. Please let me know when we can expect a response.

Posted by Beth Wellington at 1:00 PM