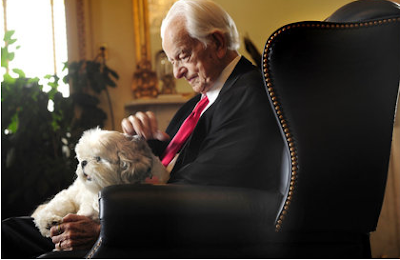 While the Associated Press obituary for the late Senator Robert Byrd (D-WV) gives him credit for shedding his alliance with the KKK, it goes on to say,

His views gradually moderated, particularly on economic issues, but he always sided with his state's coal interests in confrontations with
environmentalists.

Not quite. At the end of his life, Senator Byrd was still very much pro-coal, but he had also decried the greed of some in the coal mining industry--specifically Massey. For instance, in October 2009, he had this to say about Massey for refusing to fund a new school for Marsh Fork Elementary, which sat across the road from an impoundment. And this was months before Massey's Montcoal, WV explosion at Upper Big Branch Mine.

Such arrogance suggests a blatant disregard for the impact of their mining practices on our communities, residents and particularly our children. These are children’s lives we are talking about....This is about companies that blatantly disregard human life and safety because of greed. That is never acceptable. At a time when coal is under such close scrutiny, coal companies operating in West Virginia should be working together to put their best foot forward. For the sake of the entire coal industry, Massey Energy should strive to be a better and more responsible corporate citizen. And for the sake of the kids, they should address these serious environmental concerns at Marsh Fork Elementary immediately.
[See Ken Ward Jr. ,"Byrd blasts Massey ‘arrogance’ at Marsh Fork," October 7, 2009.]

With regard to the Upper Big Branch explosion, Senator Byrd said,

The old chestnut that “coal is West Virginia’s greatest natural resource” deserves revision. I believe that our people are West Virginia’s most valuable resource. We must demand to be treated as such. [See Ken Ward Jr, "New commentary from Sen. Robert C. Byrd: Coal industry must respect miners, the land and the people who live in the West Virginia coalfields," May 5, 2010 ]

Also from that commentary, as noted by JW Randolph, at Appalachian Voices.

The industry of coal must also respect the land that yields the coal, as well as the people who live on the land. If the process of mining destroys nearby wells and foundations, if blasting and digging and relocating streams unearths harmful elements and releases them into the environment causing illness and death, that process should be halted and the resulting hazards to the community abated.

JW also reminds us of two other pieces from Ken about Byrd and MTR:

In the latter, Senator Byrd said,

"Some have even suggested that coal state representatives in Washington should block any advancement of national health care reform legislation until the coal industry’s demands are met by the EPA. I believe that the notion of holding the health care of over 300 million Americans hostage in exchange for a handful of coal permits is beyond foolish; it is morally indefensible. It is a non-starter, and puts the entire state of West Virginia and the coal industry in a terrible light.

To be part of any solution, one must first acknowledge a problem. To deny the mounting science of climate change is to stick our heads in the sand and say "deal me out." West Virginia would be much smarter to stay at the table."

Posted by Beth Wellington at 1:35 PM

Thanks, Beth, for such a fine review of the inner workings of Sen. Byrd -- in his own words.