Stanley Sturgill on Our Health: "Scott Pruitt and President Trump are accelerating and cheering on the damage" 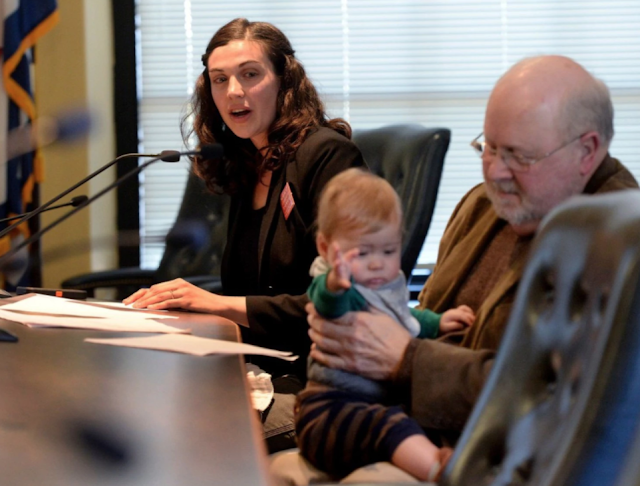 Photo by Chris Dorst of the Charleston Gazette-Mail via the Associated Press, as it appeared in Brady Dennis's (twitter) 11/28/17 Washington Post story, "In the heart of coal country, EPA gets an earful about Clean Power Plan’s fate."  Caption:  "Lindsay Pace, of Chattanooga, Tenn., testifies as retired coal miner and mine inspector Stanley Sturgill holds her son, Theo, during an Environmental Protection Agency public hearing Tuesday in Charleston, W. Va., on Tuesday. Both spoke against repealing the Obama administration’s Clean Power Plan."


Our friend and my hero Stanley Sturgill, age 72, who mined coal for forty years in Kentucky, drove to Charleston, West Virginia to testify before the U.S. Environmental Protection Agency (a misnomer under this administration) 11/28/17 on what he thinks of Scott Pruitt's proposed repeal of the Clean Power Plan.  Below, you'll see how you can participate and how I learned of his testimony on 11/29/17 and first posted on 11/29/17, but first, here's Stanley's complete statement, which he provided to me via email on 12/1/17.  This post was last updated on 12/1/17 at 10:55 am.
*

My name is Stanley Sturgill and I live in Lynch, Kentucky located in Harlan County KY. I’m a 72 year old coal miner with 41 year’s of service to the underground mining industry. I have “black lung” and COPD.

In July, 2014 I traveled over 1300 miles to Denver Colorado, to speak at an EPA hearing and I told the EPA at that time I had “black lung” and other respiratory problems. I must stay inside most all the time. Emissions from coal fired power plants and other airborne pollutants across my state of Kentucky were affecting, not only my health, but the public’s health too. I told the EPA, “Do your job and protect our people and our health.” I told the EPA, “We’re dying, literally dying for you to help us.” That was 2014.

Well guess what? You didn’t help us. You didn’t do your job and now you say you are withdrawing the “Clean Power Plan,” the past administration put into place on August 3rd 2015, to try helping us and our climate, so I’m back to let you know, nothing has changed, “We’re still dying, we’re still literally dying for you to help us.”

I would like for the EPA to show me in your new plans to gut the EPA and destroy our climate just how many people must pay the supreme price of “death” for a few, rich, greedy people to bank roll a few more dollars? Can you honestly answer that question? I’d like to know.

You may be wondering why my wife and I would get up at 3 this morning and drive several hours from Harlan County Kentucky to Charleston? It’s plain and simple, we may be old but we still love living. We both know that living in the far southeastern tip of Kentucky, all the polluting, emissions from electrical power plants (no matter if coal, gas, oil, etc.) are a part of the air we breathe each day. The jet-stream moves across our state from “WEST” to “EAST” we live 6 miles from the Virginia border, so we get all the pollution.

Now to be realistic, do I really think that this administration cares what this old worn coal miner has to say? I don’t know. I really doubt it. But I had to be here and as long as I can draw a breath I’m going to keep working to fight climate change and protect the land and country I love.
Our health, environment and global climate are actively being destroyed. And it is clear to me that EPA Administrator Scott Pruitt and President Trump are accelerating and cheering on the damage. I have come here today to ask you to stop. For the sake of my grandchildren and yours, I call on you to strengthen and defend, not repeal, the Clean Power Plan.

There is an old Appalachian saying, “What we do to the land, we do to the people.” EPA, just look at West Virginiaand the surrounding states as you travel back to D.C. and you’ll see we’ve paid a terrible price in the miles of destroyed mountains, our streams, in our health, and in our declining economy.

Believe it or not “Climate Change” is real and it’s not only costing billions in dollars in public health challenges, it’s also destroying our nation and our world right in front of our of our eyes. This year, 2017, will most likely be a prime example due to the many hurricanes, fires and rains wreaking death and havoc as never before.

In conclusion, I’m here to say that repealing the Clean Power Plan is immoral and indefensible. I respectfully demand that the EPA withdraw this proposal. Stop listening to the corrupting power of the coal, gas, oil and all other fossil fuel industries. Start following the science and common sense, and do everything possible to protect our health and climate.

EPA, please never forget this old Cree Indian Proverb: “When the last tree is cut down, the last fish eaten, and the last stream poisoned. Only then will you realize you cannot eat money.

Ken Ward Jr. shared an announcement 11/2/17 in the Charleston Gazette-Mail that  as part of the formal process for repealing the Clean Power Plan, the EPA  announced that date that it would hold hearings yesterday and today in Charleston, WV and maybe 11/30, if the agency receives “a high volume” of requests to speak. The speakers list is here for 11/28 and here for 11/29, with time set aside after these speakers for others who wished to comment and present supporting information.

Scott Pruitt signed the notice 3/28/17, indicating the EPA’s intent to review the plan, following Trumps's Energy Independence Executive Order the same date.  The details can be found in the 10/16 Federal Register and at the EPA webpage for the proposed repeal.for doing that, the agency.  If you did not attend the public hearing, your written statements and supporting information will be considered with the same weight, so long as they are submitted during the public comment period which was extended on 11/8 to 1/16/18. Comments should be identified by Docket ID No. EPA-HQ-OAR-2017-0355 and may be submitted by one of the methods listed here.  The online comment form is here.  The website indicates that as of 11:59 PM on November 28, the website had received  For more information contact Peter Tsirigotis, Sector Policies and Programs Division (D205-01), U.S. Environmental Protection Agency, Research Triangle Park, NC 27711; telephone number: (888) 627-7764; email address: airaction@epa.gov.

I first saw that Stanley had testified in Charleston 11/28 through the Washington Post story, which I read via Roy Silver of the Appalnet list serve.  The author, Brady Dennis, is a national reporter for The Washington Post, focusing on the environment and public health issues. Before that he covered the economy and was a finalist for the 2009 Pulitzer Prize for a series of explanatory stories about the financial crisis. Before that, he was a reporter for the St. Petersburg (Fla.) Times. He is a graduate of the University of North Carolina at Chapel Hill.

Through an image search and some sleuthing, I also found the AP story by John Raby (twitter) and Michael Biesecker (twitter), which was the source for the photo: "EPA hears worries about climate in heart of coal country." It appeared without a byline in Chattanooga's Times Free Press.

Environment and Energy Publishing's hub on the Power Plan is here.

Although I didn't initially find Ken Ward, Jr,'s story on the hearings, I checked his twitter feed and found a link to a story he posted "EPA greenhouse gas rule hearing in WV draws supporters, opponents," on 11/28.

Posted by Beth Wellington at 12:20 PM