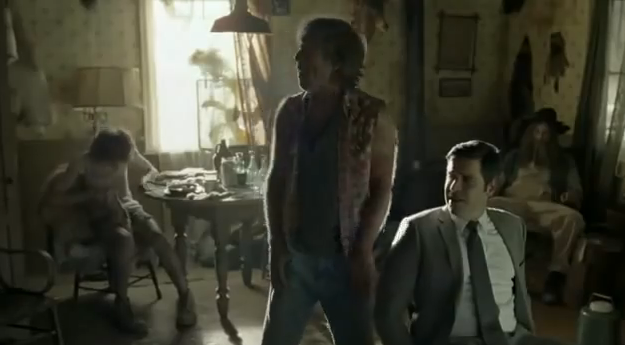 Novelist Silas House was up at 1 a.m. this morning, looking at the time stamp on his email to  Appa,he Appalachian Studies list.  And I'm guessing he might have been fuming when he sent a link to  DirecTV's "over the top stereotyping in new national commercial."

Thirty-one seconds which include a dilapidated shack with a goat wandering inside, unkempt folks with terrible teeth and more, yep this ad has all the stereotypes.

Sadly, the comments to the video Silas linked to by user Roller Coaster  included a mention of Deliverance and this:


Why does this Kentucky hillbilly believe the commercial is offensive to Appalachians? The word "Appalachian" or anything similar is not used. The commercial refers to "Mountain People" me thinks this Harlan County hyper sensitive jerk probably has family w goats in the house... Go take up serpants, ya marooooon.


Said commenter hides behind a penname as "Dolamite363," but IF he uses the same one on a certain a dating site, he lives in a town about two miles from American Legion Post 20 on what's known familiarly as The (Jersey) Shore.  IF I've got the right guy, you'd think as someone from another region of the country that's put upon by stereotypes, he would be more sensitive.  After all, the guy with the same moniker on the dating site describes himself as

intelligent, well spoken, educated... rep for a major medical equipment supplier who likes mountains and has, he is told, "a very smart sense of humor.


After all, look how this New Jersey native Odie Henderson railed against Don Jon at Roger Ebert's site, while Ebert's former partner Richard Roeper gave the film a B+.

Roller Coaster has since disabled comments. Hmm, I wonder if "our side" had started to weigh in or if Roller Coaster himself got offended by the the likes of Mr. Dolamite363.

Later this morning another Appalnet member linked to  Joe Asher's  Harlan (KY) Daily Enterprise piece, "DIRECTV apologizes for television commercial."  Except, as Silas and others noted, it was no apology at all.  Asher writes that DIRECTV Senior Public Relations Manager Jade-lin Ekstedt sent out an email


It certainly was not our intent to offend anyone and we apologize if there were customers that did not like the ad or found it offensive...The commercial ended its broadcast run on Monday and will no longer be airing.

That's what  Canadian author and illustrator Bruce McCall--best known for his frequent contributions to The New Yorker--would have called a "non-apology apology."  In the New York Times April 22, 2001 "The Perfect Non-Apology Apology" he satirized Bush diplomacy when he gave other examples about how


with sufficiently artful double talk, you can get what you want by seeming to express regret while actually accepting no blame. And this can work even if you're in the wrong!

I wonder if DirectTV, when issuing this statement was worried about liability, rude or simply ignorant.  Interestingly, in Canada, where stereotype has it that folks are unfailingly polite, Alberta, since 2008, has legislation that you can't be held at legal fault for issuing an apology.


I think it's easier to reach the Wizard of Oz than Mr. White. There's no way that you can even get into upper level management.

Tim's Marema notes in the October 25 The Daily Yonder, "Speak Your Piece: A DirecTV Insult,"


The commercial is all the more reprehensible because DirecTV ought to have special awareness of rural markets, since that’s one place where their satellite technology might offer advantages for consumers who can’t get traditional cable.

As always, there’s the question of whether calling attention to the video and reposting it do more to promote DirecTV than to chastise it. But within the pages of the Daily Yonder, there’s no question in my mind that folks who care about issues of diversity and inclusivity need to see this.


DirecTV is catching it on fb.  One example from John Francis Michael Hickey who identifies himself as from Philly but as identified with West Virginia University:

I have seen your offensive ad denigrating mountain people. You need to fire the people who approved it, withdraw the ad, and publicly apologize. Where are your heads at?

In checking other links for the ad on YouTube, it appears, according to user CurrentTVCommercials that the ad was created by the self-proclaimed "famously effective" Grey Global Group Inc. (twitter).  Helpfully, DirectTV (twitter) offers us this tip on conducting a campaign:

Maybe we should just do that.   If you'd like to weigh in on the video on your own blog, I've altered the links to the videos with the utility donotlink.com so as to not improve "'their'" search engine position."


Donotlink.com routes links to questionable sites through a unique intermediate url that forwards the visitor to the destination through javascript. This url is blocked in our robots.txt file, so (search engine) robots are discouraged from crawling it. The "noindex" and "nofollow" properties of the link and the intermediate page give robots another reminder to not crawl the link. If a known robot does decide to crawl the link, our code will identify it and serve it a blank page (403 Forbidden).

Or by all means, add you own comments on the video.  (The link I've used doesn't, however, affect the number of viewers.)  User "Current TV Commercials"is still allowing comments.

UPDATE:  As of 10/26, Roller Coaster  has made his or her videos private, rather than just disabling comments. I guess s/he didn't consider  the almost 7k viewers of  "Mountain People" a windfall.  When I checked yesterday most of the videos had been viewed by two dozen or less visitors (s/he has two dozen followers).

I've  substituted another link in Silas's quote for the user CurrentTVCommercials.  Yesterday s/he had two commenters, one of whom thought the ad was "so funny."  The other comment was "unbelievable."  Now there are additional comments specifically pointing out how demeaning the ad is.

At first I thought  think Mr. Dolamite meant "moron" not the dark brownish-red color, since UK fans sports blue and white, however, Rodger Cunningham, who teaches English at Alice Lloyd College let me know that "'maroon'” means a dumb rural person, originally a member of a community of escaped slaves."  I'm not sure how the term transmogrified from slaves to rural people. In checking the urban dictionary, "rural" has been deleted.  Maroon and moron seem similar in meaning now, although in psychology the latter was used to specifically to denote mild mental retardation and was closely associated with the eugenics movement.

Posted by Beth Wellington at 8:07 PM