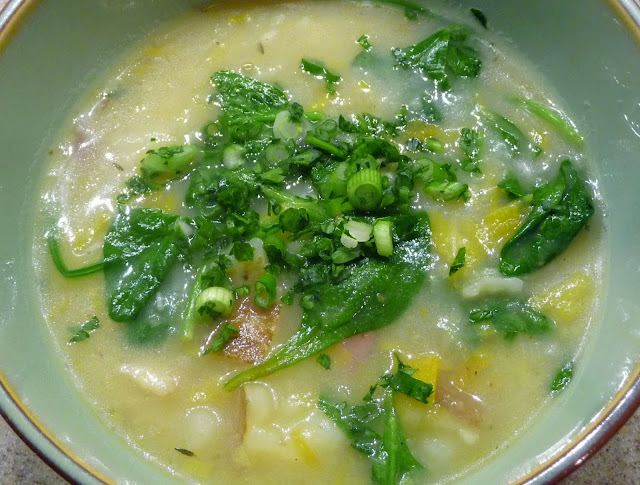 
When I was growing up one of my mom's favorite soups was vichyssoise,  her fancy name for canned Campbell's cream of potato, served chilled, topped maybe with a dollop of sour cream and some chopped chives from my father's garden.

The traditional vichyssoise includes leeks, cream and potatoes and Julia Child says that its origins--despite the name--are actually American (see her landmark Mastering the Art of French Cooking, page 39.)


My version is served hot and uses Yukon gold potatoes which are so creamy in texture that you will need no milk or cream if you puree part of the soup and return it to the pot. I usually use onions, but since the October 29 expected farm share from Glade Road Growing includes leeks, I thought why not fancy it up in honor of Julia Child.  And, as we're also expecting spinach, I decided to add some, to brighten up the look of regular recipe. I like nutmeg with my  spinach, so I added to my usual recipe.   Alternatively, you could use a bit of cumin, cardamom, coriander and  turmeric, if you prefer a more curried taste.

If you'd like for this recipe to serve as a main course, it's good with the addition of 3 cups of cooked white beans--navy, great northern or cannellini. Those who love meat may want to toss in some cooked sausage or chicken instead.

BTW, other expected items in this week's farm share are carrots and butternut squash:  add apples, orange juice--and some prunes, if you're traditional--and that could mean tzimmes.

In a cast iron skill coated in extra virgin olive oil, saute leeks, celery and garlic over low heat, stirring until leaks are tender, about 10-15 minutes.  Transfer to 3 quart stainless steel pot with a heavy bottom and a steamer top. De-glaze skillet with a bit of water and add enough water to make 6 cups. Add 2 bay leaves and 2 tablespoons of extra virgin olive oil. Bring to boil and steam potatoes for 10 minutes.  Add salt and freshly ground pepper to taste.

In a blender or food processor  puree 1 cup of potatoes and 1 cup of  soup mixture (without bay leaves) and add to pot, along with remaining potatoes and cook a bit more until it thickens.  If you are serving this as a main course, stir in cooked beans or meat and warm through.  Stir in chopped spinach and cook until wilted.

Divide the soup among bowls and dust with nutmeg or a mixture of 1/8 teaspoon each of ground cumin,  cardamom, coriander and  turmeric.

You can top the soup, if you'd like, with a dollop of Greek yogurt or vegan sour cream and chopped chives or green onions and  cilantro.