Half a loaf: the FCC's Weak Rule on Net Neutrality 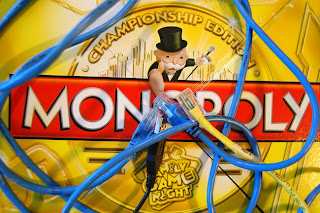 Graphic from the Florida non-profit journalism site, Flaglerlive, on its September 12, 2010 post," Net Neutrality: The First Amenment Issue of Our Time."  The following is a draft my next piece commissioned by The Guardian.
*

Net neutrality is the First Amendment issue of our time. Today, a blog can load as fast as the Wall Street Journal — and, if the blog is good, it can get more traffic than any media conglomerate.

I wasn't surprised  December 21 to learn the Federal Communications Commission (FCC) had passed its rule governing net neutrality 3-2 along party lines.  The topic's been a source of partisan wrangling for years.  Advocates of net neutrality argue users should control content viewed and applications used--that a level playing field promotes democratic participation and free speech. Broadband providers and telephone companies want freedom to boost profits by deciding which content gets to whom first and fastest. Both sides argue theirs is the course encouraging economic innovation.  My take: the new rule is another example of the Democrats' "half-a-loaf" thinking and falls short of pledges by President Obama and his administration to protect the Internet against phone and cable gatekeepers. The order's text wasn't available immediately, only FCC news releases and statements by its members--Chair Julius Genachowski, joined by Democrats Mignon Clyburn and Michael Copps, who voted to approve, and Republicans Meredith Attwell Baker and Robert McDowell, who voted nay.  Based on those, the rule
Republicans hate the measure. Senate Minority Leader Mitch McConnell (KY) criticized the FCC for taking "what could be a first step in controlling how Americans use the Internet by establishing federal regulations on its use."  He promised to "push back against new rules and regulations” once Republicans take the majority in the House of Representatives in January.  Senator Kay Bailey Hutchison (TX), the Commerce Committee's ranking member, called the vote an “unprecedented power grab by the [FCC's] unelected members” and promised a resolution condemning the rule. She had offered an amendment to block the agency from using any omnibus budget funds to implement net neutrality. Last September, Republicans already had beaten back House Energy and Commerce Committee Chairman Henry Waxman (D-CA) net neutrality bill. Public interest groups also are up in arms.  Free Press calls it a squandered opportunity. Public Knowledge says it falls short.  Media Access project finds it  riddled with loopholes.  Center for Media Justice  criticizes its minimal protections.
I expected a weak rule after Genachowski held closed-door meetings with industry lobbyists opposing net neutrality and with the industry's Open Internet Coalition, but locked out public-interest and consumer groups.  And, as Greg Sargeant noted in the Washington Post:

The problem is...that Dems...don't think they're capable of winning a protracted political standoff, even on an issue where the public is on their side, once Republicans start going on the attack....As a result, they tend to telegraph weakness at the outset...that they'll essentially give Republicans what they want as long as they can figure out a way to call it a compromise.

According to Bloomberg, AT&T, in its attempts to influence policy, met more frequently with the Commission in recent days than any other provider.  Verizon, on the other hand, wanted  the FCC out of the picture. Industry sources told The Hill that given Congressional gridlock, Verizon's call for  legislation suggests the company might not want any resolution at all.  These approaches seemed borne out when AT&T praised the FCC for ending its "hamstrung [status preventing] needed action on...real problems " while Verizon, called for "statutory underpinnings."

Copps, a strong consumer advocate, issued a statement prior to voting, saying he’d battled  since his 2001 appointment "to make sure the Internet doesn't travel down the same road of special-interest consolidation and gatekeeper control that other media and telecommunications industries—radio, television, film and cable—have traveled."  While not the proposal he would have crafted, the rule “could represent an important milestone…[i]f vigilantly and vigorously implemented by the Commission—and if upheld by the courts.”

Those, Mr. Copps, are pretty big ifs.
Posted by Beth Wellington at 1:51 PM