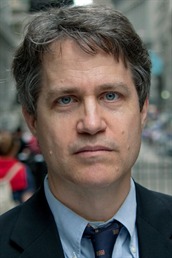 Photo of Mike Hudson, author of The Monster: How a Gang of Predatory Lenders and Wall Street Bankers Fleeced America – and Spawned a Global Crisis. This piece was commissioned the Guardian, which published it today as, "Let's not foreclose on financial reform:  The modest Dodd-Frank Act is under threat, yet the foreclosure crisis shows the dire risks of an unfettered mortgage industry."  I've only made minor changes and kept the British spelling.

This past week saw much coverage of the 1 December loan disclosures from the Federal Reserve, as required by the Dodd-Frank Wall Street Reform and Consumer Protection Act.  The act--so named because it was sponsored by Representative Barney Frank (Democrat, Massachusetts) and shepherded by Senator Chris Dodd (Democrat, Connecticut)--was signed into law on 21 July by President Obama, as a legislative response to the last two years' economic meltdown engendered by the sub-prime mortgage debacle.

Less reported was the 1 December hearing Dodd held on mortgage servicing – the latest place where fraud has surfaced. Servicers, now regulated under the Dodd-Frank Act, calculate principal and interest, collect payments from the mortgagor, act as an escrow agent and foreclose in the event of default.

This makes servicers pertinent, as the US finds itself in the middle of a  foreclosure crisis that isn't going away. According to an interview with law professor Kurt Eggert, who testified at the hearing, the problem is that:

No one agency has been given the job of regulating servicers, and so any oversight has been piecemeal and haphazard. And the regulators often have been worried more about the soundness of banks than the protection of borrowers.

This has resulted in folks losing their homes, because, consumer advocates say, it's more profitable to foreclose than to make the mortgage adjustments once promised by Obama.
Many initial loans, however, were fraudulent. For instance, just recently, on 3 December, SunTrust's Alexandro Aquinta pled guilty to:

transactions in which straw buyers and unqualified buyers obtained over $4m in … loan proceeds … [from] applications [which] contained materially false, fraudulent and misleading information … regarding applicants' employment, income and assets.

But worse, to my mind, are the falsified documents filed by attorneys in so-called "rocket-docket" courts. The resulting foreclosures severely stress families who lose their homes, as well as neighbours who see their property values decline.

To understand how we got to this state, I interviewed Mike Hudson, one of the first investigative journalists to link predatory lending to the economic meltdown and author of The Monster: How a Gang of Predatory Lenders and Wall Street Bankers Fleeced America – and Spawned a Global Crisis.

According to Hudson, fraud in the banking and mortgage industries dates back to the 1980s. The sub-prime crisis was long in the making and was facilitated by government through bad policy and lax enforcement. Its origins lay in

[A] philosophy of trusting financial players to police themselves. A lack of cops on the street, as it were, allowed fraud to flourish [with] faked paperwork and other ugly practices [in] the origination of loans – and, now, similarly dicey practices in the foreclosure process.

This lack of regulation was a bipartisan business:

The philosophy started getting traction in the Carter administration, gained even more steam in the Reagan years, continue apace under Clinton and saw its full flowering during the Bush Administration. One influential figure who was there through the Reagan-Bush I-Clinton-Bush II years was Alan Greenspan. Remember he was considered to be 'the maestro', a guy who could see around corners and could guide us to unprecedented prosperity.

The meltdown will continue as long as the bad policy and lax enforcement do. The growing foreclosure crisis is just the latest chapter:

The business model for loan servicers ensures that questionable foreclosures will continue to flood the system. With Republicans' Congressional victories, [Dodd-Frank's] financial reform is in danger. If you think the legislative battle was tough, wait until you see the bareknuckled lobbying and backroom armtwisting that are going to emerge as the new Consumer Financial Protection Bureau gets under way.

As far as the Dodd-Frank Act goes, Hudson says that the best hope lies in Elizabeth Warren's push to simplify mortgage paperwork, as a measure that could command bipartisan support. But I have my doubts about whether Warren will succeed.  Republican Senate leader Mitch McConnell's continued stated primary goal is to block all of Obama's initiatives to render him a one-term president. There's already efforts afoot to weaken the law. And the  financial industry and banking industries and their water-carriers in Congress opposed Warren's appointment to head Dodd-Frank's Consumer Financial Protection Bureau; Obama tapped her only as a special adviser to set up the Bureau. And there are other troubling developments including the Fed's recent move to strip a key protection for homeowners under the guise of reform.
The 1 December hearing was the last Dodd will chair for the Senate committee on banking, housing and urban affairs. He decided not to run for re-election after disclosures about his own sweetheart mortgage deal with the predatory Countrywide. In line for the chairmanship is Tim Johnson (Democrat, South Dakota), who has a record of supporting small predatory loan companies (pay-day lending) and fighting credit card reform.
Some argue that the financial trauma brought on by sub-prime mortgages was an unavoidable market accident: Federal Reserve chairman Alan Greenspan called it a "once-in-a-century credit tsunami". Some hold that borrowers were to blame – folks took out variable rate mortgages for homes they couldn't afford, betting already-inflated prices would continue to rise, so increasing their equity faster than their ballooning payments.
Others disparage government, either for its lack of regulation or for overselling the dream of home ownership. They argue that the buyers should beware, that corporations and politicians will always be complicit.
I disagree.  I join Hudson in hoping that an informed public can stimulate reform:

The foreclosure crisis is a serious issue; it's more than a series of paperwork snafus. The powers that be in Washington failed to get the facts and act the first time around – when lenders were engaged in a feeding frenzy of predatory lending. The foreclosure scandal is a second chance for leaders and regulators to prove that they can dig out the truth and take action.

Posted by Beth Wellington at 2:46 PM

The lawyers who file foreclosure proceedings NEED to be examined! Knowledge of applicable laws and civil procedure is not required from mortgage lenders, nor loan servicers.

In states that require judicial foreclosures, lawyers are the ones who file lawsuits to seize and sell property; and foreclosure lawyers are responsible for filing and recording foreclosure property deeds.