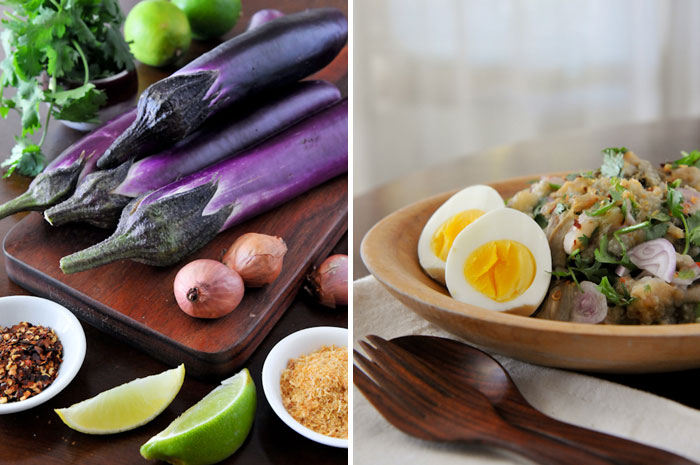 The farm share for Glade Road Growing for the week of August 4 is slated to include: tomatoes, lettuce mix, cucumber,  cilantro, and eggplant.  I thought I'd travel this week to Thailand, inspired by Rachel Cox, but substituting this homemade vegetarian sauce for the traditional fish sauce and peanuts for the dried shrimp...


1.  To make the sauce,  the night before, combine in a large sauce pan and bring to a boil:
1 1/2 cups shredded seaweed
1/2 cup of dried shitaki mushrooms
6 cups water
6 fat cloves garlic, crushed but not peeled
1 T peppercorns

Lower heat and simmer about 20 minutes. Strain and return the liquid back to the pot. Add 1 cup soy sauce, bring back to a boil and cook until mixture is reduced.  Remove from heat, cool and  and stir in 1 TB miso.  Decant into a bottle and keep in the refrigerator.


2.  If we have oriental eggplant this week, use them whole.  If they are the Italian variety, you can cut them in half. Grill outside or roast in oven or convection oven until soft to the touch, which will take about 20-30 minutes.   Remove and let cool in a covered container.

3.  While the eggplant is cooking, boil 4 eggs (duck eggs are great, or chicken eggs, if you don't have them) for approximately 7 minutes to achieve a soft boiled egg. Allow to cool and then peel.
4.  Chop 1/4 cup of cilantro coarsely.  Thinly slice 2 TB of shallots or thinly chop the same amount of red onions.

6.   Peel the eggplant and cut into bite-sized pieces. You should have roughly 1 cup. If you have more or less, adjust the amounts of the other ingredients accordingly. Combine the  eggplant with the chopped cilantro, 4 T chopped toasted peanuts and dressing. Divide into four bowls. Slice the soft boiled eggs in half one to the side of each salad. ( (If you are feeding vegans, you can substitute a block of tempeh, sliced thinly.)  Serve while the eggplant is still slightly warm.

Posted by Beth Wellington at 5:04 PM