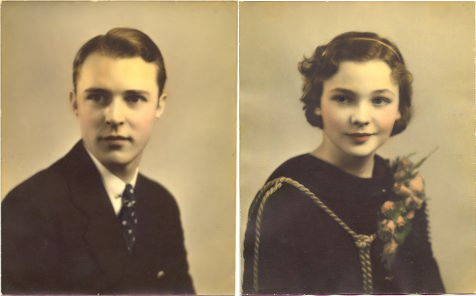 Photos and poem used by permission as posted to Facebook on 2/21 by author David Huddle.

I found this poem lovely, It's fully as powerful as the Sharon Olds poem "I Go Back to May 1937,"  in The Gold Cell, but with the right man and the right woman. David commented that "Only after I posted the photos...did I see how clearly they connected with this poem that was written some years ago. It's in Blacksnake at the Family Reunion.

See: Blacksnake at the family reunion : poems. LSU Press, November 2012, 55 p..   I'm happy to report that the Virginia Tech library has a copy of this and many other of David's works. You can find it on the fourth floor of Newman (PS3558.U287 B53 2012).  Huddle comes from Ivanhoe Virginia in Wythe County.  I know him from Hollins, where he has taught.  He is professor emeritus (bio) at the University of Vermont and will be at Breadloaf this summer.

A stile is a pair of steps or ladders that is accessible to pedestrians but generally inaccessible to animals. Stiles
often found in rural areas or along footpaths and allow access to a field or other area enclosed by a fence or
wall. Unlike a gate, there is no chance of forgetting to close it…. --Wikipedia

a field about the size of a city
block, a fence on both sides, with a gate through

to leave the field and arrive in her yard.
My brothers and I were specks of cosmic

dust floating far above the thistles, clover,
alfalfa, and wild strawberries that grew

in that field--no bodies, brains, or spirits,
we nevertheless witnessed a young man’s more

and more frequent trips through the gate, across
the field, and over the stile that summer,

heat of June, July, and August. Desire
is the sky, the grass, the smell of cedar,

specks of light shooting through blackness: it knows
no authority. Our mother was fifteen,

compelling as fire seen for the first time,
strong-willed as a young horse. Their mothers knew

better than to say no. My brothers and I kept
our watch, drifting closer each time my father

approached the stile to find her on the porch,
waiting in the wicker rocker. Her half-closed

eyes saw him flying to her. That’s when they
must have felt us waiting out there in time.

Posted by Beth Wellington at 10:00 PM