May 30, I'll be seeing the Participant Media film Cesar Chavez at the Lyric, which reminded me of this poem after I drove down to St. Paul in Wise County, Virginia on July 4, 1989 with other staff members of the New River Free Press.  Both Chavez and Jessie Jackson spoke that day.  The next day, U.S. District Judge Glen Williams in Abingdon would  fine the United Mine Workers and two union officers an additional $720,000 for violating his ban on forming convoys to slow down trucks delivering coal.

I compiled the illustration from a photograph in the article on the strike which appeared in the March-April 2009 issue of the United Mine Worker's Journal and a photo from the archives of the United Farm Workers.  I first published this post 5/30/14 at 6:13 pm and updated it on 8/13/14, to incorporate the photo at the end of the poem and the following explaination, which I had first drafted earlier, but never posted.


Before striking April 5, 1989, the United Mine Workers
toiled sixteen months without a contract
after Pittston Corporation cut medical
benefits to families and pensioners.
Pittston faults the union for blocking
prosperity in the region.
COAL STRIKE
Independence Day 1989
drizzles its way into
St. Paul, Virginia.
Miners, wives, kids,
supporters
in this mucked field
all decked out in camo
savor watermelon
handed off the back of pick-ups.
Beneath a banner by
New Jersey painters,
Caesar Chavez
farmworker organizer
come all the way from California
bolsters the Pittston strikers:
Non-violence will draw
others to your cause...
The judge cannot
put the whole world in jail.
*
West Virginia.
It was Pittston
who dumped slag in Buffalo Creek,
clogged the Middle Fork
starting back in '57.
Five underground mines,
two augers, one strip,
yielded up a thousand
tons of gob a day
black as the coal it came from
crisp as cinders till the rain
slushed it to an oily batter.
Wet or dry, gob steamed,
along with mine posts,
crib blocks, roof bolts
dumped sixty feet high
and behind it, the black lake.
February 1972.
Those days were wet days,
rain and flurries of snow.
And on the 26th
when the dam of uncompacted slag
began to seep
and the sheriff
sent two deputies around
to get the people up the hillsides
the company sent the lawmen home
and issued no warnings.
One minute before eight
black water roared through,
scraping a million tons of refuse,
fusing it to rolling lava,
hurling mushroom clouds of mud
hundreds of feet high
to land on Saunders
destroying the power line.
The one surviving clock
served by that line
abruptly stopped.
8:01 a.m..

*
This strike's
gone on a hundred days.
Miners, wives,
pensioners black-lunged
and crush-legged,
preachers from Roanoke
lie down in the roads,
slow their cars
to block the coal trucks.
The judge jails folks for lying down,
for driving slow.
Pittston prints full-page ads
boasting its generous spirit
its love of these mountains.
*
Think of that black lake
beginning to seep through the slag.
It is the voices that haunt you.
Someone near Saunders:
I was about 150 foot above
where the water come out.
It was burning there.
Water hit fire,
it shot right through the air
200 foot high, right through the air.
There was dust and black smoke
and when we looked again
the water was down
the smoke cleared
and we couldn't see nary a thing
not a living thing
nothing standing.
Or at Kistler
all the way down
by the mouth of the creek:
Have you ever pushed
a rubber ball
down in the water
and turned it loose?
The house jumped plumb up like that.
I cannot explain that water
as being water.
It looked like a black ocean
black as coal dust
where the ground had opened up.
If you had thrown a milk carton
out in the river that's the way
the homes skimmed along.
The water was a thing alive
coming after us to get us all.
I still think of it as a live thing.
Or at Amherst:
The whole town just raised
started moving down the hollow,
just like it was sitting.
I seen the first house hit the bridge
and then the second
then the third and fourth
and then a mobile home
just vanished underneath.
There was three women in it
they was standing
in a big picture window
and their mouths was moving.
I gathered they was hollering.
*
No warning issued.
Miles of track
coiled to barbed wire.
125 corpses
flood-lynched from tree limbs,
buried in silt piles,
washed up limp on the creek banks.
To this day
seven have not been found.
And three children's bodies
of identical size
too battered to tell apart
lie in anonymous graves.
The story is
that they were headless.
*
And when a tire is flatted,
a windshield broken out,
the judge calls this violence. 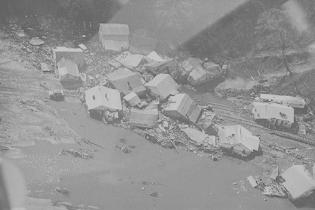 The above photograph is uncredited, but maybe Dave Peyton, who reported on the flood for the Herald Dispatch, along with the legendary Jack Hardin, could tell me who the photographer was.

Peyton is now with the Charleston Daily Mail, but he talks about going down to Man,  at the mouth of Buffalo Creek in Logan County, with Hardin here, in Bob Weaver's Hur Herald.  (h/t to Rachel) Weaver's account published his own account there last year, when he accompanied Peyton to the 4oth anniversary of  of the flood, having himself been on the scene in 1972, having left his funeral home in Spencer, WV to join his National Guard unit in Man.

In 1989, I started writing the poem you'll find above, juxtaposes the accounts recorded by Kai Erickson from survivors of Pittston's disastrous flood  with my observations of the coal strike against the company seventeen years later, when it canceled health insurance to benefits for approximately 1,500 retirees, widows, and disabled miners and refused to contribute to the benefit trust for miners who retired before 1974. The infamous Massey Energy latter bought out Pittston.

I had traveled down to the strike on July 4 that year with friends who worked on the late, great New River Free Press. (You can read about the end of the the Free Press here, but there are factual errors because the reporter took the word of those he interviewed.

As an all-volunteer advocacy journalism project, we believed that we were not constrained from activism, so long as our writing was fact-based and we disclosed our bias, which we did in a mission statement (which I don't have handy and have asked our one-time archivist if he can help me out.)  John Enangonio wrote about the strike for the paper, but it's not available online.


Erik Loomis who teaches history at the University of Rhode Island (email, website) wrote about the strike for the Lawyers, Guns and Money blog.

Posted by Beth Wellington at 6:13 PM