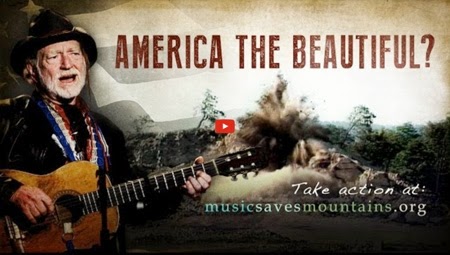 In the latest episode of the coal wars, as the House prepares to vote on HR 2824 which would shackle the Obama administration from any effort to save the mountains and water in those states, Willie Nelson has joined the effort, Music Saves Mountains. The Natural Resources Defense Council-produced YouTube video ironically juxtaposes Nelson's rendition of America the Beautiful with scenes of the destructive mining practice. Other artists involved in this project against mountaintop removal include Emmylou Harris, Dave Matthews, Sheryl Crow, Kathy Mattea, Naomi Judd, Justin Townes Earl, and Ben Sollee.

The so-called "Preventing Government Waste and Protecting Coal Mining Jobs in America"  would amend the Surface Mining Control and Reclamation Act of 1977 to implement President Bush's 2008 parting gift to the coal industry: repeal of a 100-foot buffer rule in the Clean Water Act, thus allowing companies to dump mining waste directly into streams.

The House vote comes after a February 2014 court decision to invalidate the Bush measure because Bush's Office of Surface Mining had failed in an "arbitrary and capricious" fashion to consult with the Fish and Wildlife Service before issuing the new standards and relied instead on an outdated 1996 biological opinion which did not include current information about the effects of strip mining, especially when it came to informing a rule issued more than a decade later.  The suit was brought by the Southern Environmental Law Center on behalf of the National Parks Conservation in 2009.  The Judge allowed the suit to go forward despite the Obama administration's contention that there was no longer a case or controversy. Earlier suits on behalf of other environmental groups were settled by a consent decree in March 2010 after the Department of Interior agreed to promulgate a new rule.

U.S. District Court for the District of Columbia Senior Judge Barbara Rothstein wrote in her opinion: "Faced with clear evidence that habitats within stream buffer zones are home to threatened and endangered species and that mining operations affect the environment, water quality and all living biota, OSM's determination that the revisions to the stream protection rule encompassed by the 2008 Rule would have no effect on threatened and endangered species or critical habitat was not a rational conclusion."

In a March 5 floor speech, Daniel Webster (R-FL) was pretty disingenuous: "H.R. 2824 is simple. It tells OSM to put in place the 2008 rule, study the results, and report to Congress. If the study reveals a need to draft a new rule, then a new rule should be drafted. By putting in place the already finalized 2008 rule, H.R. 2824 ensures that our streams are safe while further study is conducted.

How exactly does the rule ensure our streams are safe? The Reagan-era buffer was to have applied unless water quality and quantity would not will not be adversely impacted---a pretty tall order for mountain top removal mines which in the name of sometimes 1,000 feet wide and mile-long "valley-fills" dump the pulverized (and toxic) remains of mountains on top of headwater stream beds. If the interest were in saving government waste, rather than prohibit the reversal of Bush's 11th hour stealth attack, why not just reinstate the the 1983 rule? And as far as protecting coal mining jobs, that's not exactly a slam dunk either, as mountaintop removal requires far fewer miners than deep mining.
Posted by Beth Wellington at 11:59 PM