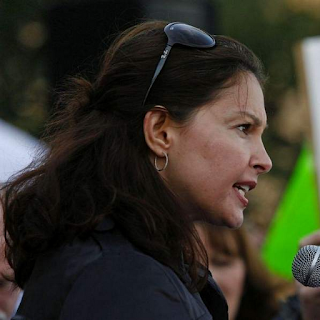 Photo (unattributed) of Ashley Judd, speaking out against mountaintop removal in 2009 accompanied an editorial  on Judd by Kentucky writer Silas House.

I have friends in Kentucky, such as a magazine editor and bookseller (I'll tell you who, if I get permission) who are speaking favorably of Ashley Judd as a possible opponent for Mitch "I Want To Be Senate Majority Leader In Order To Make Obama A One-Term President" McConnell, noting her experience and education.  It serves as an antidote for my irritation.

Irritation when folks cite Newsbusters as a  source instead  the the actual interview (video, transcript)  with Howard Fineman on The Chris Matthews Show. And although Fineman's a pundit who has interviewed presidential candidates since 1984, why not also cite a LOCAL newspaper journalist, such as  The Courier-Journal's Joe Gerth,  who interviewed U.S. Rep. John Yarmuth and also Judd, via twitter (here, here and here).

Irritation when folks put down Ashley Judd as a light- weight as as possible contender against Mitch McConnell. It even grieves me when her fan lump her (or Al Franken) with Ronald Reagan  as an entertainer who should be able to run for office.

Joe Gerth quoted U.S. Rep. John Yarmuth, D-3rd District KY. “If you had an Ashley Judd-McConnell race, I think it would be as high profile a race as Elizabeth Warren and Scott Brown.”

In the past race, the Democratic powers that be discouraged an attractive opponent in favor of running someone with a lot of baggage.  Of course, Judd has been ridiculed for her stand against mountaintop removal coal mining when an anonymous hit man ripped off a copyrighted photo and smacked it up on a billboard at a golf tourney.

If they bring up that again, we should wonder, as did Silas House, if they would have done the same thing to another politically active actor and KY native, George Clooney:


The sign insinuates that Judd has made her career on taking off her clothes. Nudity is sometimes a part of acting, yes. But to imply that Judd has made her living off that is ridiculous. If George Clooney, another Kentuckian, had made the same speech, would they be putting up a sign about him taking off his clothes, since he, too, has appeared nude on film? Of course not. Because he's a man.

Of course operatives made fun of Elizabeth Warren for her possibly overstated Cherokee heritage in a cookbook when she ran against Scott Brown.  And pundits thought that doomed her to status as an  also-ran.  Given the results on election day, ask Scott Brown if he still agrees...

Posted by Beth Wellington at 7:21 PM