Zen and the !@#Oof!* of Journalism Impact 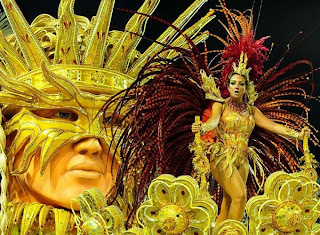 Illustration from Rio Carnival Services.  Over a year ago DigiDave David Cohn) decided to revive the idea of a group of journalists getting together once a month to write in depth about the same topic, directed by a different host each time. Steve Outing, February carnival host publishes a roundup  with links to  posts by my fellow carnies.

For the February Carnival of Journalism, our host Steve Outing asks,


What emerging technology or digital trend do you think will have a significant impact on journalism in the year or two ahead? And how do you see it playing out in terms of application by journalists, and impact?


The first definition of  "impact" in the dictionary is "collision" not "effect."

When Steve raised his question,  I had visions of the Hadron Collider, of accelerating particles banging into each other at great speed "in hopes of grabbing a piece of the primordial fire, forces and particles that may have existed a trillionth of a second after the Big Bang," as physicist Dennis Overbye put it in the New York Times.

For particles substitute tweets and facebook posts and cell phone text messages and pictures and videos, all coming at journalists faster and faster.

Rather than trying to predict the next killer app, let me give an example of how twitter has democratized the news, not during the Arab Spring or the Occupy movement, but earlier in time and closer to home.

We've always had trouble in this region getting the news out except in the case of mining disasters where lots of folks die.  Right now, we're coming up on the fortieth anniversary of the Buffalo Creek flood.  125 died after the coal company turned down the sheriff's offer to warn people to get to higher ground when the rubble used to dam Buffalo Creek  started to fail to hold back 132 million gallons of  coal slurry.

Then in  Martin County Kentucky we had another sludge spill on October 11, 2000,  which dumped 300 million gallons. Somehow no one died.  As in 1972, the sheriff was taking orders from the coal company, this time deputies turned away media on the road leading  in to the flooded area.   Although there were reports in the Lexington and Martin County papers and on their websites (and in the New River Free Press, which I authored)  the New York Times waited to write about the spill  until Christmas Day that year.

You might not  recall reading about it.  After all, by then it wasn't really news.  Compare that to the coverage of 11 million tons of oil spilled in 1989 by the Exxon Valdez and the images that it still brings to mind.

This time new media and citizens in the area were able to amplify their reports by tweeting.  I remember, at first, the moderator on a coal list serve chastised me for posting the links.  Then, a story appeared in the New York Times by December 24.  The list moderator apologized.

There's the old saying about a tree falling in the forest and, of course, a lot of trees are still falling without the larger world hearing.  There are still plenty of stories that are important to tell, but which haven't accumulated enough quantum mass to reach a broad public.

Like Steve, I'm a "digital optimist."  There are many emerging apps that journalists are embracing, as evidenced by those written about by my fellows in the Carnival and discussed this past week at the Knight Foundation's Media Learning Seminar. That's why I've started work on a new media alliance for our region:  SAMPLER--Southern Appalachian Media Project for Literacy on Environmental Renewal.

We plan to strengthen regional coverage by creating an alliance of  journalists and citizens to provide in-depth reporting on regional topics including sustainable development and transition from dependence on the mono-economy of coal mining, especially the destructive practice of mountaintop removal, as well as a mechanism to crowd source such efforts and critique coverage that is biased or stenographic. You can read more on SAMPLER here. You can make a tax deductible donation designated for SAMPLER to the Ohio Valley Environmental Coaltion at RAZOO..

With  SAMPLER, we're not waiting for the next killer app, although, should it arise, we'll figure out how to take advantage of it.  Rather, we're looking to find new ways to convey information and news by using existing platforms and human networks.  You know, friends, neighbors, libraries, local citizens groups, email lists.  I'd say mobile phones, but we have lousy reception many places in Appalachia.

What the Big Bang theory means for digital journalism

Steve urges how it's important not be "caught blind-sided, again."   An older friend tells me she always remembers what Dear Abby, or perhaps Ann Landers,  advised when someone was afraid it was too late to pursue a new path:  time will pass whether you make changes or not.

The Big Bang Theory posits a universe starting  small, hot and dense, which has since expanded into something vast.  We're finite individuals and it's tempting to get overwhelmed   trying to figure out what's coming next.  In such vastness, though, there is also space to choose, room to chill.
Posted by Beth Wellington at 11:00 PM