What Would Hal Willard Say About the North Anna Earthquake? 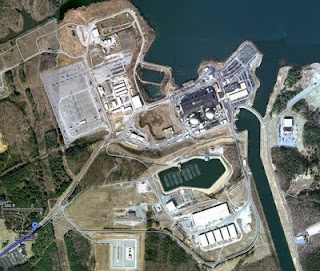 Illustration is an adaptation of the Google satellite view of the North Anna plant, 11 miles as the crow flies from the August 23 5.8 earthquake's epicenter. (H/T to Sue Sturgis at the ISS whose post  alerted me to the 1970's WaPo coverage).

Interesting that the The The Washington Post (WaPo)  writers didn't look in their own archives when writing about the August 23 earthquake, whose epicenter was 11 miles as the crow flies from Dominion Energy's North Anna nuclear power plant. As a result, no articles there about the 5.8 quake mention that officials of VEPCO  knew it was building on a fault line and got in trouble for concealing that from the NRC during the 70s. The paper started reporting on the story in 1973 when the Atomic Energy Commission began its investigation of  VEPCO. Hal Willard, the principle reporter on the story during that time, died in 2009. At the end of this post, you'll find a timeline compiled from the articles. More later when I can access the WaPo articles--anything before 1987 is not available for free online and the Roanoke County library doesn't have the the WaPo on microfilm.


The North Anna Environmental Coalition,  with the late June Allen as president (d. 2010), fought construction and operating licenses for the plant  during that time. By 2005, the Blue Ridge Environmental Defense League, fighting a third and fourth reactor at the North Anna site, issued a report from report on an earlier scandal regarding how the plant came to be constructed above a geological fault, which might be prone to earthquakes:


The story begins in 1967, the year Vepco [Virginia Electric Power--Dominion Energy's former name for a portion of the current corporation] awarded the initial contract of $446 million for the North Anna Nuclear Station on the banks of the Pamunkey River in Louisa County. Vepco hired Dames & Moore, an environmental consulting firm, to do geology studies in support of the license application. Within a year evidence of seismic faults were found but Vepco resisted the findings. The truth would not remain hidden for long.

I found this is the court documents (see paragraph 10).  Of course we know in hindsight that the conclusion was not accurate, but I'm wondering if it was even scientifically accurate at the time:


the site was as stable as one without a fault and therefore it was determined that the presence of the fault did not require changes in design specifications for units one and two and also that the fault had no bearing on approval of the construction permits for units three and four.

...Allen’s investigative talents and ability to cut-through utility and NRC double-speak were apparent as she became an eloquent, hard-nosed intervener in 1972 pointing out what she saw as collusion between the NRC and Virginia Electric Power Company.  A classical pianist who wore pearls, Allen testified before Congress identifying the “nuclear-industrial complex” as an inherently unsafe technology and frequently attended VEPCO stockholder meetings. On one occasion, when spied in the audience, VEPCO’s Chairman stopped the meeting, extended an arm,  pointed a finger directly at June and announced with great indignation, “There is Mrs. Allen.”

See also one article in The New York Times

Peter Galuszka (email, bio) has a great piece for September 2 in Bacon's Rebellion, "The Ghost of June Allen."
Tammy Purcell, correspondent for The Fluvanna Review had a detailed piece including history of the opposition on October 26, 2011, "Shake up: Quake sparks concerns over North Anna’s past and future."
Posted by Beth Wellington at 5:01 PM

Hope you can join us at the Floyd UBAN Keep the Ban Benefit Concert at the Floyd Tavern Pavilion on Friday, Sept 23. Gates open at 6:30 p,m and Mighty Shakey opens at 7:30 pm and Ember Swift will be on at 9 p.m. The incredible Natasha will be selling wonderful food. Sliding scale donation of $5-10 dollars is requested. Come support a worthy cause, hook up with great people, great food, and great music.

I apologize if this seems irrelevant, but I'm trying to trace the jazz writer Hal Willard, who apparently died in 2010. He wrote for THE MISSISSIPPI RAG as well as a biography of the jazz cornetist Wild Bill Davison. The same fellow?