If You're Questioning the Election Results, We Need an Audit. Or Even if You're Not... 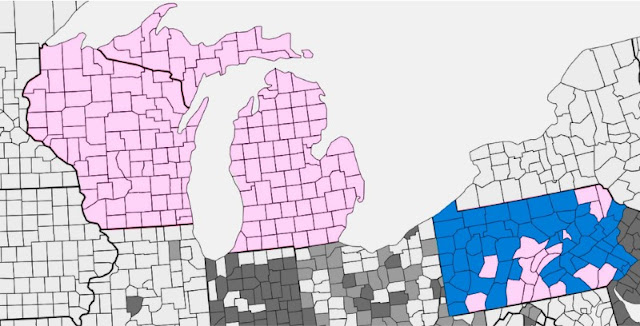 Graphic from "Want to Know if the Election was Hacked? Look at the Ballots" by J. Alex Halderman published on November 22, 2016.  Caption: "The pink counties predominately use optical scan paper ballots, which can be examined to confirm that the computer voting machines produced an accurate count. Blue counties use paperless voting systems, which require forensic analysis."

*
For the second time in sixteen years, the winner of the popular vote in the election will not be inaugurated as president. (Something that happened only three other times in the history of our country--with the other instances all happening in the 19th century.)

Among what seems to me to be a spinning of wheels,  this IS interesting

Ron Rivest and Philip Stark explained in USA Today  on November 18 how the presidential vote could be audited before December 13, when the States have to file their results with the Electoral College.


We know that the national results could be tipped by manipulating the vote count in a relatively small number of jurisdictions — a few dozen spread across a few key states. We know that the vast majority of local elections officials have limited resources to detect or defend against cyberattacks. And while pre-election polls have large uncertainties, they were consistently off. And various aspects of the preliminary results, such as a high rate of undervotes for president, have aroused suspicion.

Auditing .5% of the ballots would do the trick

Rivest (Institute Professor at MIT and a member of the U.S. Election Assistance Commission Technical Guidelines Development Committee) and Stark (associate dean of mathematical and physical sciences at the University of California, Berkeley and a one-time appointee to the board of advisers of the U.S. Election Assistance Commission)  say a “risk-limiting” audit--in which a random sample of just 1 percent of the paper ballots cast  is examined--“could give 95% confidence that the results are correct in every state. And it might not even require 1% of the ballots. An audit would first

On November 18, Rivest and Stark linked to a Verified Voting  petition at Change.Org addressed to the Secretaries of State of Florida, Iowa, North Carolina, Ohio, Pennsylvania, Wisconsin and Michigan, asking for an audit. Author Justin Krebs has a petition at Moveon.Org addressed to Clinton, Trump, Gary Johnson, Jill Stein, Secretaries of State in Michigan , Pennsylvania and Wisconsin.

Ditch the phone campaign to the Justice Department

Relying on the good will of the Secretaries of State seems a stretch.   Although less of a stretch than calling the Justice Department to demand an audit.  Even if, according to Gabriel Sherman, National Affairs Editor for New York Magazine,


...some Clinton allies are intent on pushing the issue. This afternoon, Huma Abedin’s sister Heba encouraged her Facebook followers to lobby the Justice Department to audit the 2016 vote.

(Well, actually, his link goes to a Daily Beast writer who posted a screenshot of Heba Abedin's facebook page.  You or I can't even see the facebook posts, even if you follow her and her twitter page no longer exists.)


The Justice Department does not tally the number of callers to determine whether federal action is warranted...Investigatory decisions are based solely on the facts and evidence as they relate to the federal statutes the department enforces.

Other media writers, including by CNN's political producer Dan Merica, linked to Gabriel Sherman, not for his coverage of the campaign to phone the Justice Department, but for his "scoop" from a "source briefed on the [conference] call with Clinton campaign chairman John Podesta and campaign general counsel Marc Elias.  The source says a  group including voting-rights attorney John Bonifaz and J. Alex Halderman, the director of the University of Michigan Center for Computer Security and Society, told Podesta and Elias that they had found evidence that in


Wisconsin, Clinton received 7 percent fewer votes in counties that relied on electronic-voting machines compared with counties that used optical scanners and paper ballots. Based on this statistical analysis, Clinton may have been denied as many as 30,000 votes; she lost Wisconsin by 27,000....complicating matters, a senior Clinton adviser said, is that the White House, focused on a smooth transfer of power, does not want Clinton to challenge the election result.

Does New York Magazine have the rigorous sourcing requirements depicted in All The President's Men of how the Washington Post covered the Watergate scandal? Sherman, in particular, has been criticized by the The New York Times's Janet Maslin as setting "a record for blind items and the untrustworthiness they engender" in his bio of Roger Ailes. Clinton communications director Jennifer Palmieri did not respond to Sherman's request for comment. Neither did Bonifaz or Halderman.  The latter also failed to respond to requests for comment yesterday evening from CNN's Merica.

Alex Halderman, the subject of the scoop, says Sherman got it wrong


includes somebody else’s description of my views, incorrectly describes the reasons manually checking ballots is an essential security safeguard (and includes some incorrect numbers, to boot).

Let me set the record straight about what I and other leading election security experts have actually been saying to the campaign and everyone else who’s willing to listen....Were this year’s deviations from pre-election polls the results of a cyberattack? Probably not. I believe the most likely explanation is that the polls were systematically wrong, rather than that the election was hacked. But I don’t believe that either one of these seemingly unlikely explanations is overwhelmingly more likely than the other. The only way to know whether a cyberattack changed the result is to closely examine the available physical evidence — paper ballots and voting equipment in critical states like Wisconsin, Michigan, and Pennsylvania. Unfortunately, nobody is ever going to examine that evidence unless candidates in those states act now, in the next several days, to petition for recounts...

Support Jill Stein's recount as the most practical short-term action

State laws call for recounts at a candidate’s request as long as he or she can pay for it. Green Party candidate Jill Stein announced a fundraising campaign on her website to ask for a recount in Wisconsin by the Friday deadline. She is also raising funds for a recount in Pennsylvania by November 28 and Michigan by November 30.

According to Ballotpedia, Wisconsin machines have a paper trail. Michigan uses paper ballots. Pennsylvania (as is the case in Virginia) has no statewide paper trail. A pattern, if found, would have to hold true for all three states in order for the electoral college vote to favor Clinton.

After the election, human beings can examine the paper to make sure the results from the voting machines accurately determined who won. Just as you want the brakes in your car to keep working even if the car’s computer goes haywire, accurate vote counts must remain available even if the machines are malfunctioning or attacked. In both cases, common sense tells us we need some kind of physical backup system. I and other election security experts have been advocating for paper ballots for years, and today, about 70% of American voters live in jurisdictions that keep a paper record of every vote.

There’s just one problem, and it might come as a surprise even to many security experts: no state is planning to actually check the paper in a way that would reliably detect that the computer-based outcome was wrong. About half the states have no laws that require a manual examination of paper ballots, and most other states perform only superficial spot checks. If nobody looks at the paper, it might as well not be there.

And superficial spot checks are not enough, as Black Box Voting points out.

Following the 2000 election, billions were spent on new voting machines. My first post about the problems was in 2005.  Halderman has suggestions for how to fix the mess:


States still using paperless voting machines should replace them with optical scan systems, and all states should update their audit and recount procedures. There are fast and inexpensive ways to verify (or correct) computer voting results using a risk-limiting audit, a statistical method that involves manually inspecting randomly selected paper ballots. Officials need to begin preparing soon to make sure all of these improvements are ready before the next big election.

Posted by Beth Wellington at 12:02 PM