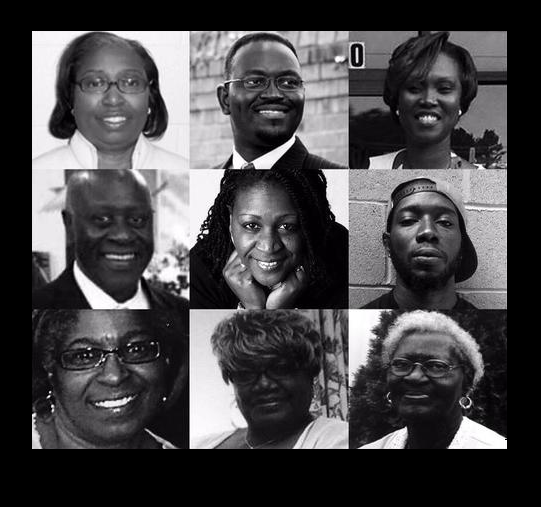 This photo of the victims was used on a memorial poster.  The original, in color, had accompanied news accounts.

For those wishing to donate,

Throughout his ministry, the Rev. Clementa Pinckney worked with many non-profit organizations, including the Palmetto Project, to address social and economic challenges facing youth and marginalized communities in South Carolina.  In coordination with the City of Charleston, the Palmetto Project has created this special fund to continue this work in those communities in which Reverend Pinckney served as a pastor. The Fund is guided by an advisory board of his colleagues, friends, and family along with representatives from congregations he served including Emanuel AME Church.


Also, at the request of her family, the library will have a fund to continue Ms. Hurd's work there.

The City of Charleston has also been collecting funds for the Mother Emanuel Hope Fund for the victims' families, with any surplus to go to the church.

What to say about the killings in Charleston?  I'm heartsick and at a loss, other than to say that this was an act of terrorism.  And so I turn this page over to my friend and community organizer Ash-Lee Woodard Henderson of Chattanooga, who calls on us to respect the local leadership in her post on Facebook, which I'm republishing here with her permission.  Ash is connected to both Concerned Citizens for Justice in that city and Atlanta's Project South.  Both organizations are signatories of  The Movement for Black Lives statement on Charleston.  The picture is her current profile picture on Facebook.  That's her in the center standing behind Margaret Block (oral history pdf), one of the leaders of the Mississippi Freedom Summer.  For another piece by Ash, see her post on fighting mountaintop removal. 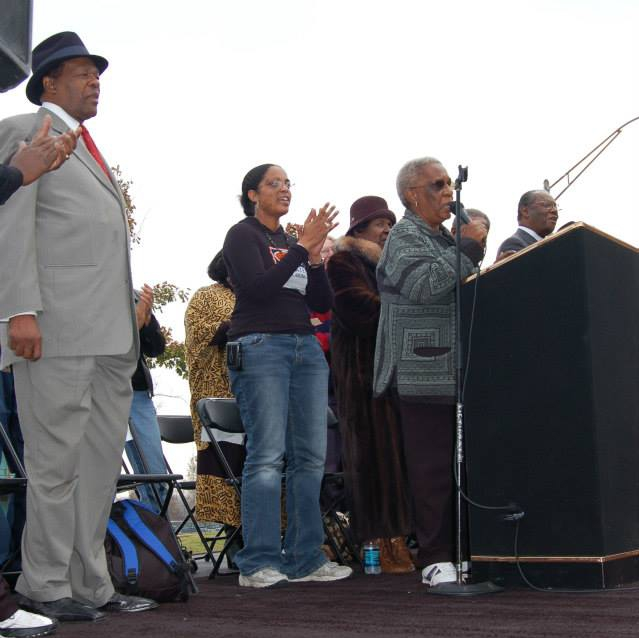 
I'm feeling some sorta way about folks who aren't from Charleston, some who aren't even in Charleston, encouraging folks to flock to the city, to flock South, for the funerals/memorials.

1) anti-Black racism is everywhere. Including where you live. What you doing on your home turf?

2) the activists and organizers worth their salt are working nearly 24/7 to get folks free in that city. It's where their focus should be (healing from this trauma, taking care of themselves and their community, and fighting like hell to get free), not comforting those of us that aren't most immediately impacted by this tragedy. We're all impacted, sure, but not in the same ways or to the same degree.

3) these communities and, even more, these families deserve to have their moments to collectively grieve without being watched like they're in a reality tv show that they never asked to participate in.

Black tragedy is NOT a tourist attraction. It shouldn't be made into an extractive industry. Don't buy into or perpetuate it.

Things to think about before going:

Did someone from or living in Charleston ask you to come?

Are they connected to and accountable to a crew that supported that invitation?

What can you contribute that will support their local work? What are you leaving behind to increase their capacity to change Charleston for the better?

Can you handle the emotional and physical toll it will take on your body, so as to not burden the local folks who are going through it right now.

Posted by Beth Wellington at 9:51 PM