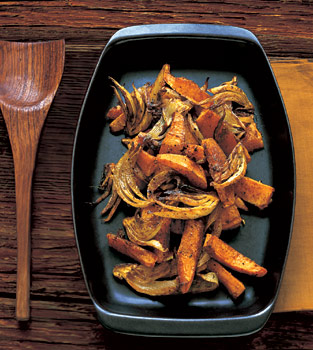 Photo by Lisa Hubbard for the October 2004 Bon Appetit


The October 28 farm share for Glade Road Growing is slated to include butternut squash, spinach, arugula, green peppers and fennel.

Fennel is also delicious raw sliced thinly in a salad, such as this one from the summer, but substituting fall fruits such as pears and apples for the peaches and tomatoes

4.  In a small bowl blend the following spices:

5.  Sprinkle spice mixture over veggies and sprinkle with sea salt and freshly ground pepper.  Continue cooking in cast iron skillet or heavy saucepan on stove until veggies are tender, turning once, about 10 minutes.

6.  Transfer to a shallow dish and serve.

Posted by Beth Wellington at 10:10 PM