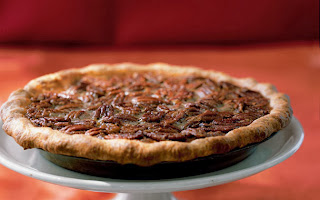 The November 12 farm share from Glade Road Growing includes winter squash and since it's getting close to Thanksgiving, I thought I'd diverge from stews and salads and casseroles and provide one for my favorite pie.


Not having much of a sweet tooth--except for dark chocolate or vanilla bean ice cream--I found the Kayro syrup base WAY too sweet---all I really liked  was the pecans. Decades later, I had a brainstorm: why not top a pumpkin (or sweet potato or squash) pie with maple syrup-glazed pecans? This recipe started with the "famous" one you'll find on the Libby's canned pumpkin, but I tweaked it (a word which has been ruined by sounding something from Breaking Bad or Miley Cyrus), including cutting back on and changing the form of the sweetener.


I'm not much of a pie crust fan, either, finding it a waste of fat calories, unless it's made with butter and finding that the bottom layer always seems to get soggy.  But tomorrow, I'll include my recipe for a flaky, press-in whole wheat olive oil crust--an update of another recipe in the book.

Make pie crust in 10 inch glass pie pan and store in refrigerator. If you are not using a crust, butter and flour the pan.


Measure out 1 cup of pecan halves and toss in 2 TB pure maple syrup to coat.

Roast, peel, cube and mash a winter squash, two sweet potatoes or a pumpkin.  Measure out 2 cups to use in this recipe and reserve the rest for another use. Due to how these options vary in sweetness, you will be using the following amounts of pure maple syrup respectively:

If  you like a sweeter (i.e. traditional) pie, you can use up to 1/2 a cup for the pumpkin, and adjust the recipe proportionately for the others. Since the syrup is a liquid, rather than using evaporated milk, you will be using 1 cup powdered milk and mixing with enough water to make make 3/4 of a cup.  If you're a vegan substitute a cup of coconut cream and 4 TB cornstarch and 1 TB vanilla for the evaporated milk and the eggs.

To make custard, in a large bowl, beat 2 large eggs.  Stir in the squash (or pumpkin or sweet potatoes)  and the dry ingredients.  Gradually stir in the syrup/milk mixture.

Pour custard into pie pan (with or without pre-made chilled crust).  Arrange coated pecans on top of custard.

Bake at 425 for 15 minutes. Reduce temperature to 350° F; bake for 40 to 50 minutes or until knife inserted near center comes out clean. Cool on wire rack for 2 hours. Serve immediately or refrigerate. Top with whipped cream, if desired, before serving.

*
The farm share is also slated to includ carrots, spinach, kohlrabi, and a rose roasting radish .  In case you're wondering, the latter is also known as a watermelon radish.  Here's a photo from Sally via a seed catalog: 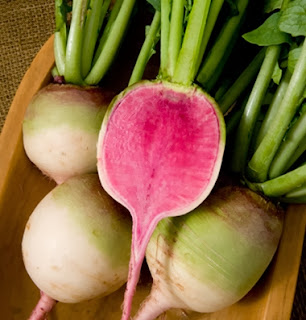 She wrote me to say, "They can be roasted, but honestly we think they are pretty crisp and sweet (minus the tough skin), a lot like regular small radishes but slightly more fibrous."

The history of this recipe starts when I took home-economics and my teacher Mrs. Altice was selling a 1960's series of cookbooks Favorite Recipes of Home Economics Teachers, published in Montgomery, Alabama.  I bought my NYC-born mother the whole set and what she became famous for, thereafter, was her made-from-scratch Southern Pecan Pie from the 1963  Desserts Including Party Beverages volume. 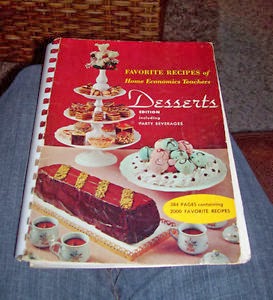 Made-from-scratch from Mom was a big deal, because she made many other desserts from mixes. Every Thanksgiving dinner she would bake a pecan pie, as well as a pumpkin (using canned pumpkin and milk) for my father. Every New Year's Eve dinner, she would bake another pecan pie, as well as as lemon meringue (using Royal pudding and pie filling laced with extra lemon juice) for Yishe Finck, my pediatrician and her childhood friend.
After college, I would bake a similar recipe, but in industrial quantities, with the syrup mixture literally ladled from a (clean) 50 or more gallon rolling plastic trash can,, as I sweated in front of the ovens of Colonial Williamsburg's (AKA CW) commissary.

You can find the  1964 version of Salads Including Appetizers, as well as the  1965 version  Casseroles, Including Breads book Virginia Tech's in Special Collections.  Neither of these are even in the catalog for the Library of Congress, despite having an LC number.  There is however a "new" 1979 combined salads and vegetables  edition. The Vegetables Including Fruits book came out in 1966.  I've also found that the Meat Including Seafood and Poultry volume dates from 1962 ...I can't recall the others, since the LOC isn't cooperating.

The press has since moved to Nashville and continues to update and expand the series.

Posted by Beth Wellington at 11:49 PM