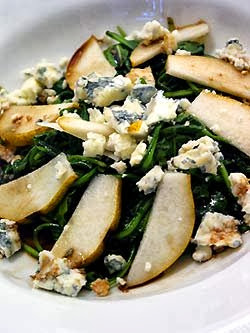 Photo from  The Kitchn, an online daily.

The cinnamon basil (also known as Vietnamese basil, Saigon basil or húng quế) contains cinnamate, the same chemical that gives cinnamon its flavor.  It's good  in hot drinks and with fruits or used in Asian soups, salads and stir fried dishes.

Arugula is a dark green with a spiky leaf and a peppery mustard flavor.  It's traditionally found in Mediterranean cuisine.  Younger, smaller arugula leaves are milder and less bitter. The larger leaves are better wilted and served with and acid and  cheese to cut the sharpness. If they are too strong for your taste you can combine with other milder greens. It's good served with a variety of fruits and berries or with roasted beets.

If you'd like, before wilting the arugula you can also saute one red pepper seeded and  cut in strips. For a main course, you can also toss in 2 cups of cooked garbanzo or navy beans or 1/2 cup of pecans, walnuts or sliced almonds.

Posted by Beth Wellington at 7:50 PM