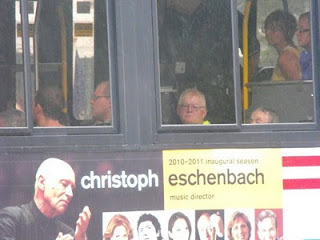 This photo by Wendy Johnston (used by permission) shows Larry Gibson waiting to be taken to jail  in Anacostia, after sitting in at the White House in September 2010   By then, Judy Bonds was already too sick from cancer to attend the "thousand-hillbilly march” she'd envisioned.  Larry, Wendy and her family and I were  among 2,000 Appalachians and allies at Appalachia Rising, which preceded the Arab Spring and the Occupy Movement, but garnered little national coverage beyond one piece in The Hill and an AP article. The latter distorted a serious protest into to some kind of colorful neo-hippy celebration, despite the fact that 125, including Larry, chose to be arrested.  There wasn't a good news account until Judy's obituary in the New York Times.

Bo Webb told The Guardian that I should be the one to write a commentary there on Appalachia Rising. I first used Wendy's picture for the draft on my blog. I titled it "Appalachia Should Abide," which was a variation of a line "Mountains should abide" a line from "Looking Out Over An Abyss in Boone County." The line was inspired by Psalm 125:1: "Those who trust in the Lord are like Mount Zion, which cannot be moved, but abides forever."

I wrote that poem for Larry , when I met him through the West Virginia Writers' Mountaintop Removal Tour in October 2006. My fellow poet Chris Green--who heads Berea's Appalachian Studies program, but was at Marshall at the time-- had told me about the tour and OVEC kind made space for someone from Virginia. I also wrote a piece for LLRX.com "Strip Mining on Steroids" that was later part of the testimony at the United Nations.

Larry is survived by his wife, Carol, his sons Cameron and Larry, Jr. and his daughter, Victoria. He was sixty-six years old. The funeral will be private and public memorial service will be announced later. Larry's family has requested that condolences be in the form of donations to Keeper of the Mountains Foundation, which Larry founded in 2004 to support mountain communities.  September 11, the Foundation let me know that you can sign the memory book here.

Larry Gibson lived thirty-five miles  southeast of the West Virginia capital of Charleston.  His  family had  looked up to the peaks that surrounded them since the late 1700s.  Over 300 of  his ancestors lay buried in the family grave yard.

Like many Southern Appalachians, Larry left home to find work, returning when he retired, in his case from General Electric.The destruction started in 1986.


I remember when they started mining here. It was a fine day: pretty sky, no clouds. All of a sudden I heard thunder in the distance. Couldn’t see no clouds, but we heard thunder. That was in spring of ’86.

By the fall of ’86, it was upon us – we could see the dynamite explosions and we were breathing in their dust.

Then by the spring of ’87, we could taste it in our mouths. It was foreign. We didn’t know what it was, or if it was legal to blow up a mountain. I mean, who does that? I just didn’t believe it, I couldn’t fathom it. But I was hearing it, and I was seeing it in the distance, and then finally I could throw a rock and hit it.


When asked whether he had a picture of Kayford Mountain before mountaintop removal mining, Larry'd  say he had always thought,


Why should you take a picture of a mountain?  It's going to be here forever.

By 1993, Larry put his land and the mineral rights to the coal below in trust as Stanley Heirs' Park, when he found out that his 53 acres land was worth over a million dollars an acre.  That same year Massey Energy offered Larry $140,000 for his land.  Larry didn't turn down Massey because of its bad offer, though.

But you see, for me, there's no amount of money that could buy this place, even if it was for sale. You know, you've heard of people that talk about their roots. Well, this is it, for me .   My family, the  last three hundred years came from this place...at least. How do you wipe that off? How do you make that okay?  Does money pay for that?  No. Money doesn't pay for everything.


Massey didn't go away.  Instead it continued to pushed the trees and topsoil it regarded as "overburden" into the valleys, drilled holes and set charges of ammonium nitrate and diesel fuel,  blowing eventually blowing up the surrounding releasing coal and silica dust into the air and releasing toxic heavy metals such as mercury, copper, arsenic, lead and selenium into the streams which feeds the Ohio and Mississippi Rivers. Larry would tell folks,


I will not be satisfied to be called a victim. I am a survivor.

You rarely see the mountaintop removal mining  from the interstate in West Virginia.  It's hidden over the ridge.   In October 2006, when a group of writers walked with Larry up his farm path to the gate that marks the end of the 53 acres he'd preserved,  we were staring out over an abyss.  Larry told us it was "the gate of Hell."  When we flew  over later, we could see just how much was gone.

I lost  kin in the Holocaust.  Seeing Larry's homeplace reminded me of  visiting Ann Frank's annex in Amsterdam . If Stanley Heir's Park were the annex--one family's tragedy--what lay beyond was Dachau.  The vast destruction left me tearless, hollowed me, much as Big Coal had hollowed out the land which had once been Kayford Mountain.


Because Larry refused to sell out to Big Coal,  he'd been threatened and even shot at.  The  Pittsburgh Post-Gazette reported in 2006 that his first marriage ended "over his doggedness and the blasting and the threats to his life."


My wife left, but I could not leave this land. You pay a terrible price in this fight, but paying their price is worse.


Larry would go on to marry Carol, who  supported his efforts.  She was with him and his cousin working on the mountain this morning, according to his daughter, Victoria.  She told Ashley Craig (email) at the Daily Mail  that her father had been moving lumber from the porch and began to feel odd.  Sitting in his truck didn't help and his family called the rescue crew, which decided to fly him to Memorial Hospital in Kanawha City.  Talking about his death, Victoria said,

Because of Larry's devotion not just to Kayford, but to all the mountains which might be saved by its example, he lives on in all of us he inspired to fight the violence of Big Coal with non-violence.

May his memory be a blessing. May it give us strength to carry on.
Posted by Beth Wellington at 10:42 PM