The Inauguration: the address, the poem, the benediction 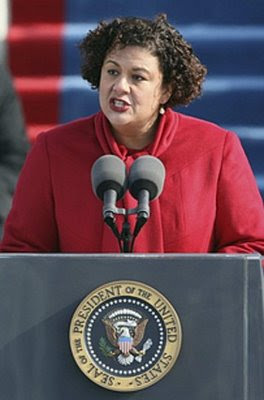 Photograph by AP's Ron Edmonds of poet Elizabeth Alexander reading her "Praise song for the day" at the inauguration of Barack Obama. The photograph accompanied "Poet Elizabeth Alexander, Bridging a Nation's Past, Present and Future," Bob Thompson WaPo story on the web tonight which will appear January 21, 2009 in the paper on page C10.


Praise song for the day by Elizabeth Alexander

Each day we go about our business,
walking past each other, catching each other’s
eyes or not, about to speak or speaking.

Someone is stitching up a hem, darning
a hole in a uniform, patching a tire,
repairing the things in need of repair.

Someone is trying to make music somewhere,
with a pair of wooden spoons on an oil drum,
with cello, boom box, harmonica, voice.

A woman and her son wait for the bus.
A farmer considers the changing sky.
A teacher says, Take out your pencils. Begin.

We encounter each other in words, words
spiny or smooth, whispered or declaimed,
words to consider, reconsider.

We cross dirt roads and highways that mark
the will of some one and then others, who said
I need to see what’s on the other side.

I know there’s something better down the road.
We need to find a place where we are safe.
We walk into that which we cannot yet see.

Say it plain: that many have died for this day.
Sing the names of the dead who brought us here,
who laid the train tracks, raised the bridges,

picked the cotton and the lettuce, built
brick by brick the glittering edifices
they would then keep clean and work inside of.

Some live by love thy neighbor as thyself,
others by first do no harm or take no more
than you need. What if the mightiest word is love?

Love beyond marital, filial, national,
love that casts a widening pool of light,
love with no need to pre-empt grievance.

In today’s sharp sparkle, this winter air,
any thing can be made, any sentence begun.
On the brink, on the brim, on the cusp,

praise song for walking forward in that light.

Copyright © 2009 by Elizabeth Alexander. All rights reserved. A chapbook edition will be published on February 6, 2009 by Graywolf.

(With a hat tip to Mark Doty for giving the proper lineation.)

I was one of about five hundred folks who turned up at the Lyric Theatre today with staples for the food pantry in exchange for a screening of the inauguration of our 44nd president ( or I should say presidency, as Grover Cleveland gets counted twice for non-consecutive terms in 1885–1889 and 1893–1897, thus being the 22nd and 24th president.)

The address as prepared for delivery is here
The benediction by civil rights veteran, the Reverand Lowery is here

I like Alexander's poem (unlike Adam Kirsch of the New Republic who called it "bureaucratic" or Erica Wagner who found it "unmemorable.") Maybe not as coherent or disciplined as it could have been, but it's hard to write for an occasion (as Jim Fisher pointed out in Salon) and to write in language and images that can be perceived on first hearing by a wide audience.

To me, Alexander summonsed up ordinary Americans moving forward, in a poem appropriate for the occasion. Could it be a southern thing, finding this poem perfectly fine, as did poets interviewed in the Ashville area? And the folks at Split This Rock had thoughtful things to say-- Melissa Tuckey and Ethelbert Miller (with more at his blog, here) plus Sarah Browning and Joseph Ross in the comments.