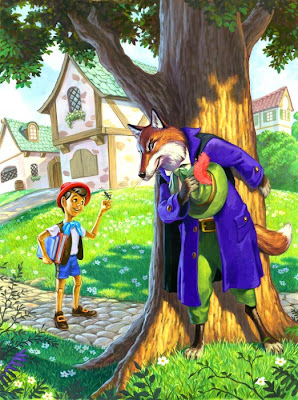 Illustration of Pinocchio by John Walker (email, website) at Picture-Book.com

May 9, the Nuclear Energy Insitute agreed to voluntarily monitor radiation leaks into groundwater. David Lochbaum, director of the Nuclear Safety Project for the Union of Concerned Scientists and leaders of 32 other environmental groups had on January 25, 2006 filed a petition accepted by the Nuclear Regulatory Commission (NRC) to require nuclear reactor operators to provide information on their programs to detect the potential release of water contaminated with radioactive materials. The NRC had formed a task force which resulted in the NEI's reaction.

the Nuclear Energy Institute, the trade association of reactor operators, acknowledged that it was providing all of the financing, but would not say what the budget was.

I discovered the new astroturf group when I was in Charlottesville last weekend and read John Borgmeyer's article "The greening of nuclear power" in the May 2-9 C'ville.

The naming of the coalition mirrors language used in 1989 by the International Solar Energy Society, as well as that in Bush's 2006 State of the Union message in announcing the Advanced Energy Initiative

a 22-percent increase in clean-energy research -- at the Department of Energy, to push for breakthroughs in two vital areas. To change how we power our homes and offices, we will invest more in zero-emission coal-fired plants, revolutionary solar and wind technologies, and clean, safe nuclear energy.

Actually, according to an preliminary analysis by the American Association for the Advancement of Science, the nuclear research portion of that initiative would reflect a 40% increase.

In February 2004, the Department of Energy teamed up with the electric power industry to issue its Strategic Plan for Light Water Reactor Research and Development .

Ironically, the launch came as an international conference, Chernobyl + 20 convened April 22-25 in Kyiv, Ukraine. The April 26, 1986 Chernobyl disaster reminded people of the dangers of nuclear power, as had the Three Mile Island melt down about 100 miles west of Philadelphia on March 28, 1979. And there have been lesser known problems which led to the aforementioned petition.

In his C'ville article, Borgmeyer writes,

The public relations blitz comes as the Bush Administration plans to jump-start America’s nuclear industry. In August 2005, Bush signed an energy bill that kicks the nuclear power industry a reported $12 million to add to the 103 nuclear plants currently operating in the United States. Around the same time, the Nuclear Regulatory Commission changed its rules to streamline the approval process for new nuclear plants.

Richmond-based Dominion Energy, Inc. is the first company to take advantage of these recent federal incentives. As Dominion seeks approval for two new nuclear reactors on Lake Anna in Louisa County—just 30 miles east of Char-lottesville—the company is trying to recast nukes as the healthy choice for an eco-conscious America.

Ironically, to place it in its best light, the federal government's official information site reports that while the Bush administration has supported nuclear expansion, as of

October 31, 2005, however, no U.S. nuclear company has yet applied for a new construction permit.

Meanwhile the twentieth anniversary of Chernobyl has returned attention to the disaster. The BBC has posted a haunting remembrance, Chernobyl: 20 Years On. The UK's Observer Magazine published an article of the same name by Adam Higginbotham on March 26, recounting eye witness accounts. The National Geographic posted "Photo Gallery: Chernobyl 20 Years After the Disaster. The International Atomic Energy Agency has posted a feature, "In Focus: Chernobyl." On April 26, Democracy Now aired "Chernobyl 20 Years Later: New Report Finds Death Toll From Nuclear Disaster Close to 100,000."

Clearly, the nuclear power industry has to come up with some strategy to convince the public of the need for new reactors. In an interview with Borgmeyer, David Lochbaum, director of the Nuclear Safety Project for the Union of Concerned Scientists, posits that the coalition is

a reflection of the fact that global warming and climate change is a top message of most environmental groups.This is an attempt to co-opt that message.

controversial new program...[to] “reprocess,” or separate, weapons-usable plutonium from the spent nuclear fuel generated by U.S. power reactors.
This proposal would make it easier for terrorists to acquire the material for making a nuclear bomb. It would require the construction and operation of an array of nuclear facilities that would handle enough plutonium annually to make thousands of nuclear weapons. It would also make disposing of nuclear waste more difficult, encourage other countries to reprocess, and cost a tremendous amount of money.

Posted by Beth Wellington at 3:56 PM