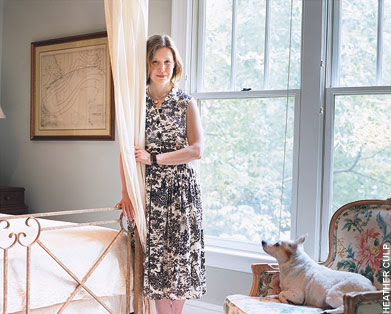 Photograph Ann Patchett taken in her home in Nashville by Heather Culp from an interesting piece, "Intimate Portraits," by Kate Summerscale in the August 11, 2007 Telegraph Magazine.

Ann Patchett's Run would have been a perfect novel, by my lights, if she hadn't tried to tie up everything in the last chapter. It's still a worthwhile meditation on politics, race and family. I'm a great admirer of her novels, including her first, Patron Saint of Liars. She's most famous, of course, for Bel Canto, which won the Orange Prize for Fiction and PEN/Faulkner Award.

Wendy Fry had an interview in the August 3 San Diego Union-Tribune, "For Ann Patchett, the best part of the process is not the writing" in which Patchett says,

The only thing interesting about my process is I write the whole book in my head before I ever pick up a pen. While I'm emptying the dishwasher, or making the bed, I've got these complicated storylines and characters developing in my head....It's a very happy time, like staring into a fog. I do not write my way through it. I really work it out in my head...“That part [the writing it down], for me, is really unpleasant... I'm so happy making it up and I'm so unhappy writing it down.

For those of you who might want to check out her occasional writing in newspapers, see

Posted by Beth Wellington at 6:11 PM