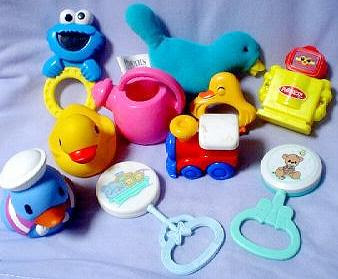 Photo from Alliance for a Clean and Healthy Maine's body of evidence report: Phthalates-- Beauty Products and Beastly Vinyl.

Now it will be interesting to see how the chemical industry lobbies against the Kids' Safe Chemical Act (H.R. 6100 and S. 3040) to amend the Toxic Substances Control Act. Both bills designed to reduce exposure of children, workers, and consumers to toxic chemical substances were introduced May2o. The Senate bill will receive a hearing September 16 before the Senate Environment and Public Works Committee, but won't come to a vote until the next session of Congress. The bill would require that chemicals used in tens of thousands of products be proved safe before they are allowed to be sold, rather that requiring regulators to show that a product is dangerous before they can force its removal. According to the bills sponsors, of the 80,000 chemcals used in household products, the EPA has required toxicity testing of only 200.

The European Union banned the use of phthalates in some products, including baby toys, in 1999, but here there had been only a voluntarily removal of phthalates from objects intended to go into an infant's mouth such as infant bottle nipples and teethers.

If the plastic softeners, phthalates, which can be endoctrine disruptors, the Environmental Working Group writes that

Studies of suggest exposure to phthalates increases the risk of reproductive system birth defects and hormonal alteration in baby boys, and reproductive problems and hormonal changes in men. Though phthalates are considered hazardous waste and are regulated as air and water pollutants, they are unregulated in food, cosmetics, and consumer and medical products.

Opponents had tried to derail any further measures. For instance, the American Chemistry Council would have you believe that those who worry about the health effects of phthalate have "cherry picked" negative results and that the chemicals

have established a very strong safety profile over the 50 years in which they have been in general use. There is no reliable evidence that any phthalate has ever caused a health problem for a human from its intended use.

And the Center for Individual Freedom ( a pro-conservative project of Townhall.com) complained in February 2008 that one of the doctors authoring a journal article that month on infant exposure to pthalates, Dr. Sheela Sathyanarayana (bio), should have disclosed that she was a member of Physicians for Social Responsibiity, charging that her findings were more political than scientific.

no studies have been performed to evaluate human toxicity from exposure to these compounds.

The Committee was in turn reacting to the January 2003 Exposure Report from the Centers for Disease Control and Prevention (CDC) that found that some people have very high levels of phthalates in their blood.

For more information, you can watch clips or read the transcript of an interview with Dr. Michael Shannon (email), a pharmacologist/toxicologist and chair of Children's Division of Emergency Medicine at Children's Hospital Boston, who serves on the Committee.
Posted by Beth Wellington at 6:44 PM