The Arrest of the Free Tibet Videobloggers 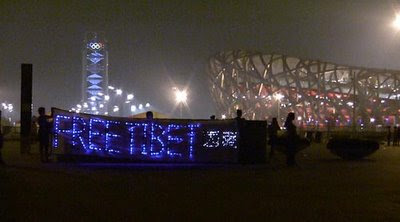 Photo of a LED protest banner from Students for a Free Tibet Flickr site.

During the Olympics, the Chinese put an end to a cadre of bloggers, videographers and artists acting as an independent media center for dozens of activists in Beijing seeking to draw attention to that government’s occupation of Tibet. Arrestees include light artist James Powderly and Alive in Iraq videoblogger Brian Conley. For more, see BoingBoing's entry of August 19.
Videographers Jay Dedman and Ryanne Hodson eluded police and provide a video interview on August 25 for Free Tibet.

UPDATE: Follow up post on August 31 from Dedman and Hodson on their blog, RyanIsHungry.
Posted by Beth Wellington at 9:06 PM