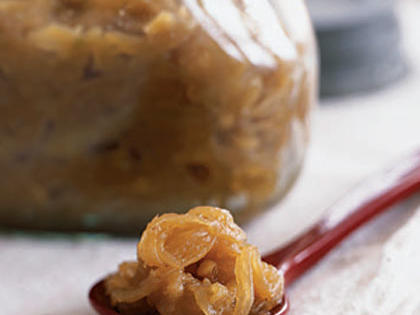 This week JP tells me the bag share from Glade Road Growing will include 1 1/2 to 2 pounds of onions.  He asked for a recipe for onion marmalade.  This makes a great topping for bruschetta, pizza or pasta.  It's delicious in a grilled cheese and tomato sandwich or to top chicken, pork, beef or fish.  I even like it as a savory addition to yogurt, along with steamed potatoes and squash (or, let's face it, straight out of the jar!)

I think the traditional method is worth the extra time, but I've included an alternative way, which cuts the cooking time to about a half an hour.

2.  Add onions and garlic, salt and pepper to pan. Cover and cook 20 minutes or until onions are very tender, stirring occasionally.

3.  Add the sweetener and reduce the heat to medium-low.  Cook stirring frequently for about 10 minutes until the onions appear dry.

4.  Uncover and add vinegar to onion mixture and reduce heat to low.  Continue cooking stirring occasionally for up to an hour until the onions are soft and dry.

5.  Serve warm or at room temperature. Store the marmalade in the refrigerator. It will keep for several weeks.

1.  Melt butter in  skillet over medium heat and add sweetener, cooking a minute or so until it's completely dissolved.

Moroccan and Asian Ribbon Salads with Carrots, Cucumbers and Peppers 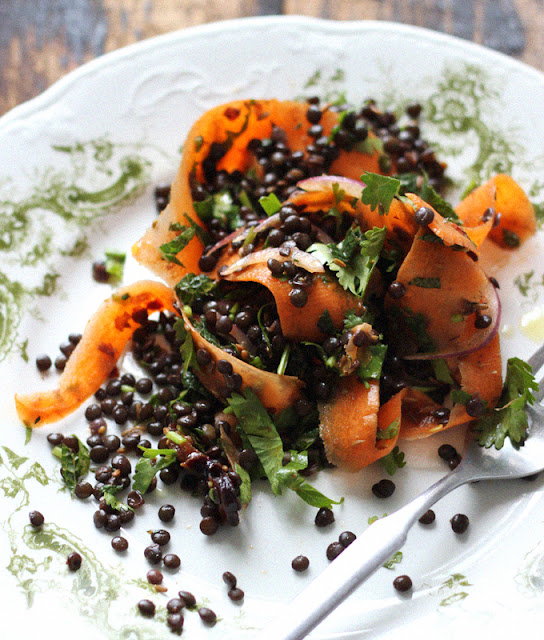 Photo from Sarah Britton of My New Roots, her food blog based in Copenhagen, Denmark.


Ribbon salads are lovely. If you don't have a mandoline, a simple vegetable peeler works well.  I've added a cucumber and chopped peppers to the salad pictured above.   Britton's inspiration is Moroccan, but if you prefer Asian,  you might could substitute edamame for the lentils and use the Asian dressing recipe I've included instead.  If you'd like to make this a meal, serve the Moroccan salad over 2 cups of cooked quinoa or the Asian salad over 2 cups of cooked whole wheat, buckwheat or rice noodles.

1.  Cook the lentils or endame and rinse.
2.  Whisk the marinade together in large bowl.
3.   Wash the carrots and wash and peel the cucumber.  Using the peeler, peel long ribbons lengthwise and place in the bowl with the marinade. Let sit while you prepare the rest of the veggies.
4.  Stem and seed the pepper and chop finely.  Peel onion and chop finely.
5.  Make the dressing of your choice. First, toast the whole seeds in a dry skillet over medium-high heat until fragrant.  Let cool.  Add with remaining dressing ingredients to a jar with a tight lid and shake well.
6.  In a large bowl, add lentils or edamame and the veggies.  Pour on dressing and toss well.  Store covered in refrigerator until ready to serve.
7.  Divide the salad among four individual bowls and garnish with washed and chopped herbs. 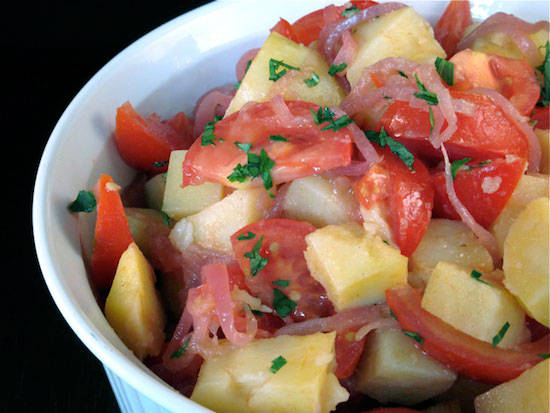 1.  Mix together vinegar, water spices for pickled onions.  Bring to a boil and take off heat.  Pour over onions and let cool.  Cover and refrigerate for at least two hours.

2.  Steam potatoes in covered pot boiling water until tender, about ten minutes.  Transfer to a bowl to cool.

3.  Meanwhile cook eggs in a large saucepan of boiling water until whites are set and yolks are still slightly soft, about 7 minutes. (You can cook the eggs a minute or two longer if you like them more set.) Drain and rinse in cold water until cold.  Drain and peel.  Set eggs aside. 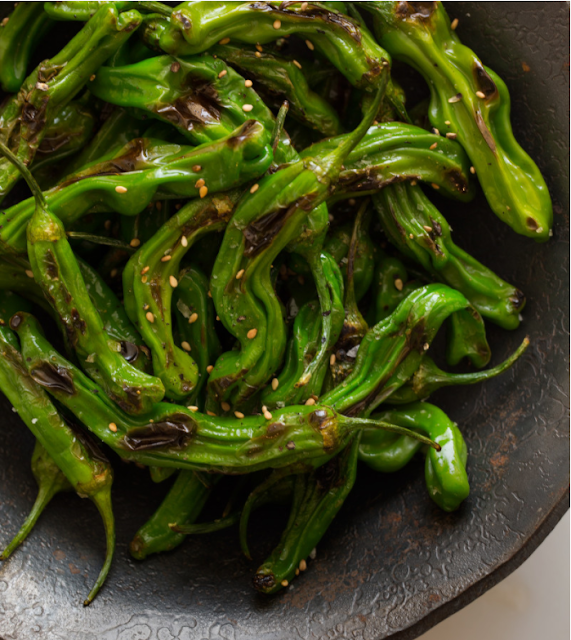 JP tells me that this week's bag will contain shishito peppers and suggested that I feature them in the recipe.

Of Japanese origin, folks describe shishito peppers as  grassy and citrusy,  sweet and mild in taste.  Except when they aren't.

Some say that about one in ten or twenty are hot, which makes them a fun kind of surprise.  In Scoville heat units, they measure  50 – 200, meaning that at their hottest, they are still 13 times milder than jalapeños.  Matt Bray of Pepper Scale writes that it's likely that the shishito has its roots in the padrón, another pepper which varies in heat.  That pepper likely ended up in Spain in the 16th century from South America.  He speculates that the Japanese soil mixed with continued growing of the mildest peppers likely converted the taste and heat to what we have today.

On the other hand, Sandi Gaertner writes in her Fearless Dining blog that "I have yet to find a hot one….and I have had at least four pints of shishito peppers in the past month in our farm box." Despite not finding any hot ones, they are still a favorite and she has recipes for a variety of chilled soups including pepper,  pepper and mango and gazpacho,  as well as for a shishito sauce to serve with chicken over cheesy polenta and a shishito stir fry.

Since shishitos have thin walls, they can be roasted whole and eaten, except for the stems.  I am giving you directions on how to blister them in an iron skillet.  Since it would take at least a half a  pound to serve four as an appetizer,  I'm suggesting that if there are fewer you halve them lengthwise and use to garnish this week's tomatoes and cucumbers in the quinoa salad or use them to supplement other sweet peppers in Gaertner's recipes.

1.  The night before, to cook the beans, in a heavy bottomed stainless steel pan, cover one cup of dried chickpeas with three cups of water and bring to a boil.  Reduce heat to low, cover with lid and simmer for five minutes.  Let soak overnight.  Drain and rinse the chickpeas and repeat, but this time simmer until soft, about an hour to an hour and a half.  Drain and rinse a second time.

2.  To cook the quinoa, add the 2/3 cup of raw quinoa and to two cups of boiling water and return to boil. Take off stove and rinse well. Add back in a scant 2 cups of water and return to stove and bring to a boil. Turn down to low. Cover. Cook 15 minutes. Let stand for five minutes and then
fluff with a fork.

3.  In a medium large bowl,  combine all the salad ingredients, cover and store in refrigerator to chill.
4.   Place cast iron skillet over medium heat.  When a drop of water will evaporate add sesame seeds and cook until they pop and transfer to a dish.
5.  Turn the heat to high and add the oils.

6.  Carefully add peppers to pan and sauté for 3 to 5 minutes, moving them around the pan frequently. Season with salt and pepper.
7. Once peppers have charred/blistered all around and have begun to wilt remove from heat.  Cut in half lengthwise.

8.  To serve, transfer the salad to four individual bowls, top with half a pepper (or more, if they are available)  and toasted sesame seeds and drizzle with additional sesame seed oil.