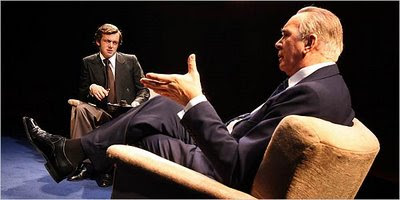 Alastair Muir's photo accompanied the NYT review of Frost/Nixon when it opened as a play.


Ron Howard is bringing to screen the performances of Michael Sheen(previously seen Tony Blair in The Queen) and Frank Langella, pictured above, from their staged version of Frost/Nixon, Peter Morgan’s presentation of the back story of the David Frost television interviews with Nixon in 1977 which opened April 22, 2007 at the Bernard B. Jacobs Theater.) Morgan wrote the screenplay.

No word yet on whether this is coming to the Lyric, but I'd love to see it. Ron Howard was on Democracy Today December 15.
Posted by Beth Wellington at 12:02 PM