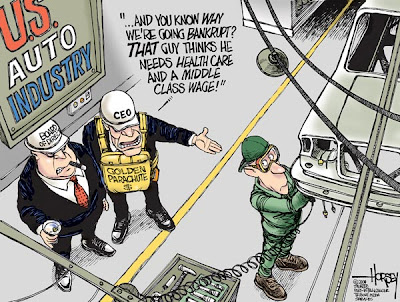 Y'all remember the thrashing the execs got for their traveling to the bailout request in private corporate jets. Now they're reportedly thinking about carpooling. But that aside a lot of flack was anti-labor. The Washington Post's D. J. Dionne (email) has his column up for tomorrow, "Crunch Time for the Big 3," in which he writes

There is a paradox at the heart of the proposed bailout of the auto industry. The rescue would have no chance of passing without the muscle of the Big Three's unionized workforce. Yet you can't turn around without hearing someone trash autoworkers for the terrible crime of trying to earn a decent living.

That's clear from reviewing a multitude of editorial cartoons over at Cagle. In fact, the only cartoon I could find to illustrate Dionne's point was the one above by David Horsey, who is a treasure trove on labor issues in genral and more. Here's his his take on Prop 8 from 11/22. I admire his work because he goes a bit farther for an original image.

The failure of the Big Three is regularly attributed to the high wages and benefits earned by members of the United Auto Workers union, and it's true that the Detroit-based auto companies operate under heavy "legacy costs" for retirees' pensions and health coverage negotiated during the industry's fat times.

But the blame-the-workers-first cant ignores the fact that if the Big Three had designed better cars, they would not have lost as much market share to Toyota, Nissan and other competitors. The unions did not prevent management from producing a better product -- and I say that as someone who has enjoyed driving Saturns for the past 15 years.

It's also nonsense to say that the UAW has been indifferent to cost issues. The last auto contract included so many givebacks, on top of revisions in an earlier pact, that Ron Gettelfinger, the UAW president, was threatened with a rank-and-file rebellion. He told a House committee last month that because of "these painful concessions," the gap in labor costs between the Detroit-based auto companies and the "foreign transplant operations," as he called Toyota and the others, "will be largely or completely eliminated by the end of the contracts."

Posted by Beth Wellington at 3:04 PM