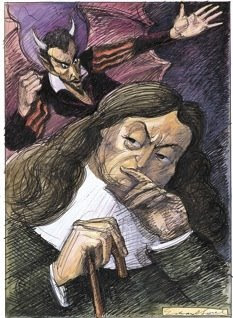 Illustration from Jonathan Rosen's “Return to Paradise”, in the June 2 issue of The New Yorker.

I recommend Rosen's piece. According to NPR :

When Milton began writing the poem in 1658, he had been blind for four years. He recited the entire work to an assistant, 40 lines each morning for five years, says . When the secretary was late, Milton was said to have grumbled around the house, "I want to be milked. I want to be milked."

The Guardian published an editorial December 6, "England's Glory" to honor Milton on the anniversary of his 400th birthday today, December 9. In it, the paper mentioned a new book Britain Since 1918: The Strange Career Of British Democracy by David Marquand
(ISBN:9780297643203) which posits, according to the Guardian, that Milton

shaped three great themes of English popular politics: republican self-respect as opposed to monarchical servility, engaged civic activity versus slothful private apathy, and government by challenge and discussion rather than deference or conformism.

Posted by Beth Wellington at 6:09 PM