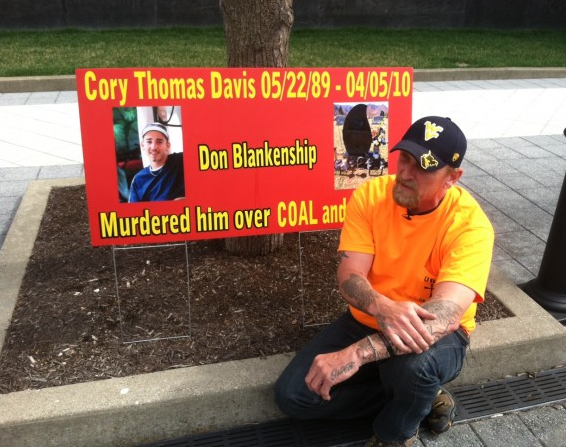 Photo of Tommy Davis lost his son Cory along with a brother and nephew at Upper Big Branch by Chris Lawrence to accompany his 4/2/14 story, "Upper Big Branch families want Blankenship prosecuted."

Former Massey CEO Don Blankenship is  "a "tireless advocate for mine safety."

In what alternative universe would folks believe such a description by his attorney William W. Taylor III. The science fiction version of the coal industry arrived today in response to today's federal indictment regarding the Upper Big Branch (UBB) explosion that killed 29 miners back in 2010. Blankenship's  record is so egregious (and personality so defiant) that West Virginia native and national journalist and editor Michael Tomasky called him "the coal industry's most gleefully Dickensian figure" back in 2009 and Jeff Goodell described him after UBB as the "Dark Lord of Coal Country" and "the industry's dirtiest CEO."

Ever since the disaster, there have been calls to prosecute Blankenship including a demonstration by some of the family members on the courthouse steps back on April 2, 2014.  Those relatives got some manner of satisfaction today, when U.S. District Attorney Booth Goodwin issued a statement  that Blankenship faces up to 31 years in prison if convicted.

Back in 2010, Pam Napper told the story of her son Joshua's premonition that a disaster  would kill him, but still said the explosion was a "freak accident."  After all the investigations and today's indictment, she has changed her viewpoint about Blankenship.

I think it's about time...He was a big part of this. He knew what was going on in that mine and continued to let it go. I hope he gets what he deserves. I am so excited. They aren't sad tears today. They're happy tears.

Goodwin announced early on that he would not prosecute Alpha Natural Resources (the coal company which bought Massey), saying the corporation was "not a life, it's not a being, it can't go to jail." At the same time, he stressed that he would continue to pursue the evidence. My first thought today, When I received his statement via email was Goodwin has made good on his word.

Blankenship stands accused of four charges: two counts of conspiracy (to violate mandatory federal mine safety and health standards and to impede federal mine safety officials), one count of  making false statements to the United States Securities and Exchange Commission  and another of committing securities fraud, the latter two stemming from Massey's "willful violation of safety laws" at  UBB:

The denials are nothing new, just creative lawyering


Taylor's responsed in a similar vein, when David Hughart, president of a Massey Energy subsidiary, admitted he had conspired with the chief executive officer when he pled guilty to two conspiracy counts before a federal judge in Beckley and agreed to cooperate with prosecutors.


Blankenship "did not conspire with anybody to do anything illegal or improper....
To the contrary, Don took every step to make the mines under his responsibility safer....We are not concerned about Mr. Hughart's recollections. People often remember untrue things when they are attempting to reduce a possible prison sentence.

Hughart didn't mention Blankenship by name, but Massey only had one CEO and Taylor links to the news story that includes the denial at his website.

Taylor also    brags on that website that he is "well-known for his creative motions practice" and that he "[o]btained dismissal of all criminal charges against Dominique Strauss-Kahn, the former managing director of the International Monetary Fund (IMF), who was accused of sexual assault in a New York City hotel.

Taylor's denials are of  a piece with Blankenship's "documentary," Upper Big Branch, Never Again, claims UBB was caused by a "natural gas inundation," not his safety-law violations.  In July, Blankenship was complaining to Lee Fang about "reg-cecession...“a recession caused by excessive regulation.”

As Ken Ward, Jr. pointed out back in 2011, it's hard enough to go after coal companies and their executives.  Can you imagine the pillage in the alternate universe where we do away with such regulations as exist?  I'd prefer a universe where the regulations are strengthened and enforced.  How about you?  Goodwin's prosecution of Blankenship is at least one step in that direction.

Posted by Beth Wellington at 11:42 PM